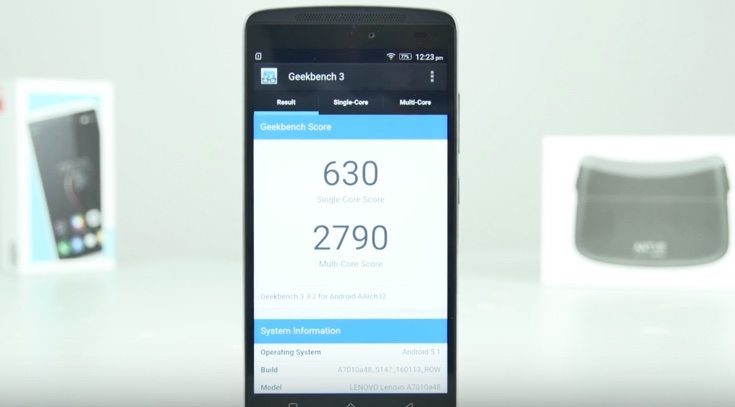 The Lenovo K4 Note launched in India earlier this month and flash sales for the device have recently started. If the popularity of the K3 Note is anything to go by, this new offering will be in big demand. However, you might be interested in some benchmark results before you buy. Today we’re looking at Lenovo K4 Note benchmark results vs HTC One A9, Samsung Galaxy J7, and other popular handsets including the K3 Note predecessor.

Key performance specs for the K4 Note include a 1.3GHz MediaTek MT6753 octa-core processor, Mali T720-MP3 graphics, and 3GB of RAM. For a fuller look at specs you might like to take a look at our Moto G Turbo vs K4 Note comparison. The Lenovo K4 Note has now been put through its paces in various benchmarking tests. The benchmarks involved are AnTuTu 5, Vellamo, Geekbench 3.0, GFXBench, 3DMark Ice Storm Unlimited, and Basemark OS II.

The Lenovo K4 Note benchmark video that you can see embedded below this article shows these tests being conducted on the device. After each bout of testing you’ll see a table with the result of the K4 Note compared with the benchmark scores of other smartphones. As well as the phones mentioned above, some of the other handsets on the tables include the Lenovo Vibe S1, Xiaomi Mi 4i, Yu Yureka, and more (phones vary according to test).

As an example, in the AnTuTu test the Lenovo K4 Note is well down the table in seventh position (out of 10). The HTC One A9, Samsung Galaxy J7, and perhaps surprisingly the older Lenovo K3 Note all manage better results. We’re not giving all the scores here as you can see each test when you watch the video below. Like us, you might be surprised at the Lenovo K4 Note benchmark scores overall when compared to the other handsets.

After viewing the video we’d be really interested to hear what you think about these Lenovo K4 Note benchmark results. Are you satisfied or not with the performance of the phone as illustrated in this testing?