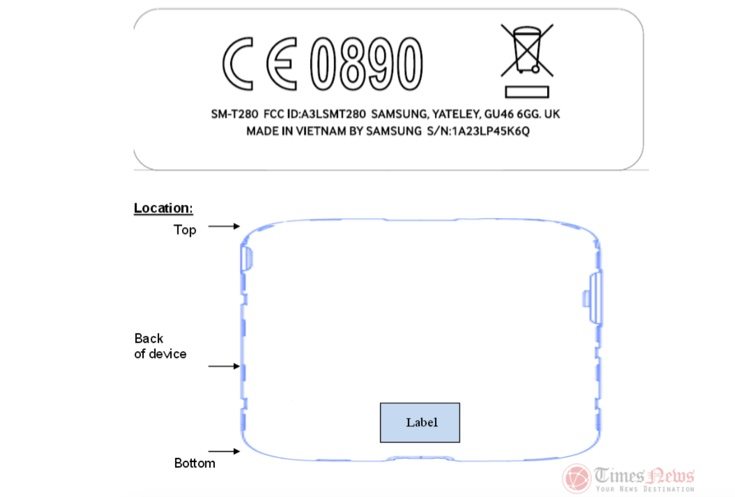 Previously a leak gave us an idea of some of the specs of the Samsung Galaxy Tab E 7.0 with model number SM-T280, and also SM-T285 for a 4G LTE version. Now the FCC documentation gives us a little more information. The size of the device is 186mm x 117mm x 180mm, and connectivity options include WiFi, WiFi Direct, Bluetooth, and Mobile Hotspot.

We also know that the tablet has a non-removable battery, but so far we haven’t seen any mention of the battery capacity. Earlier leaks about the Samsung Galaxy Tab E 7.0 disclosed specs that include a 1.3GHz Spreadtrum SC8830 processor and Mali-400 MP2 graphics. Some further specs are thought to be a 7-inch display with 1280 x 800 resolution, 1.5GB of RAM, and 8GB of internal storage that will be expandable via microSD. It’s also rumored to have a 5-megapixel rear camera and a 0.3-megapixel front-facing snapper.

We know that Samsung is holding a pre-MWC 2016 event on February 21 for the launch of the Samsung Galaxy S7 and S7 Edge. Whether we will also see the launch of further devices such as the Galaxy Tab E 7.0 is open to question, but it’s not long until we’ll find out.