Galaxy Note 5 Android Marshmallow update beta rolls out for some 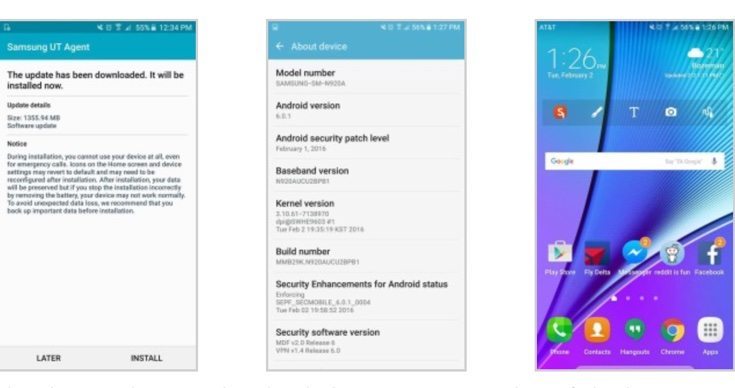 This next item is rather a snippet but nevertheless should be interesting to plenty of readers, especially those with the Samsung Galaxy Note 5. It’s reported that the Galaxy Note 5 Android Marshmallow update beta is now rolling out for some users, specifically those who were selected to participate in the beta testing program.

Last month owners of the Samsung Galaxy S6 and S6 Edge in the UK and South Korea were invited to take part in beta testing for the Android 6.0 Marshmallow update. Those who registered started receiving the beta software very swiftly afterwards. Now some of those who applied for the Galaxy Note 5 Android Marshmallow beta update in the US have received emails about how to install it.

While this is promising news it’s reported that only 200 people were chosen to participate in the Galaxy Note 5 Android 6.0 update beta stateside. All of these are using the AT&T Galaxy Note 5 variant (SDM-N920A) and some have already started to receive the update. Updated Galaxy Note 5 units have a February 2 kernel build date and build number B29K.N920AUCU2BPB1. The Android 6.0.1 update is 1355.94MB in size and brings Google’s Android February security patch along for the ride.

It would be interesting to hear from any readers who are taking part in this testing, so if you have received the Galaxy Note 5 Android Marshmallow beta do let us know. How has it affected the performance of your device, and what do you think of the new features it offers?