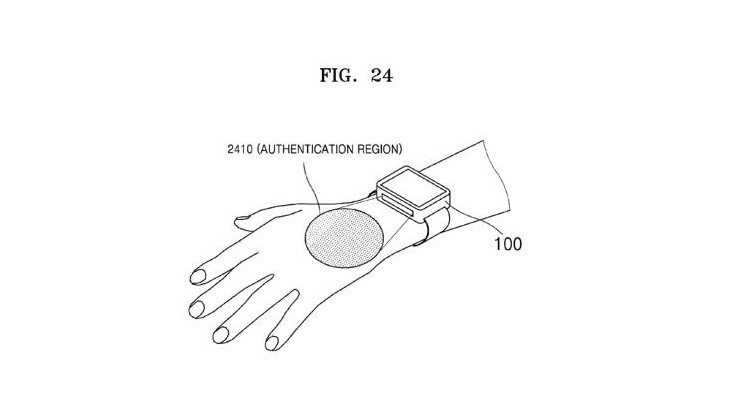 Over the past few years, we’ve seen dozens of handsets arrive with fingerprint scanners along with a handful that let you unlock using your peepers. Veins may be the next step, and Samsung has a patent that shows us how they envision security on their future wearables.

We’ve seen some cool concepts roll out from Samsung courtesy of patent filings, even if half of them never see the light of day. One of the company’s latest patents involves a new type of scanning tech for smartwatches and fitness trackers, and it’s definitely the type of thing we could see in the very near future on a new wearable from the company.

Samsung’s patent shows an unlocking method that will utilize your veins in place of a fingerprint. The top of your hand would be scanned by a laser of sorts that shoots out of the side of the smartwatch, and as most folks have plenty of veins in that region, we’re guessing that’s the sweet spot compared to the flipside. Obviously, mobile payments would come into play along with the usual security measures.

We don’t have fingerprint scanners on smartwatches yet, but eventually someone will do it whether we need them or not. Veins actually seem like a better choice for several reasons, and it will be interesting to see if Sammy can implement a futuristic scanner in the side of a smartwatch.

Would you like to see smartwatches come with biometric security or is there a need for it at this point?