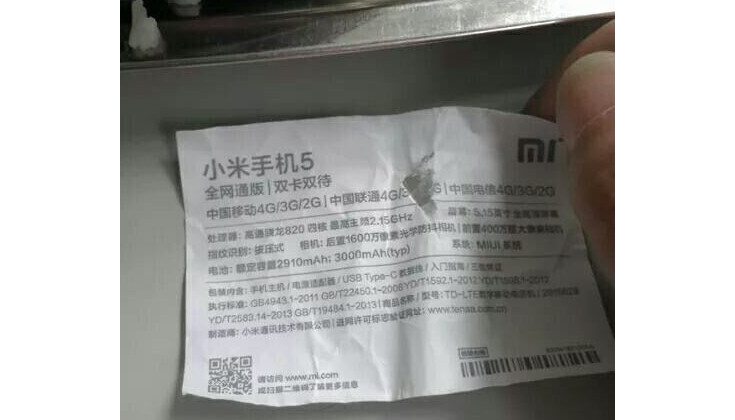 Another day, another big smartphone leak. This time around it’s not Samsung or LG under the lends, but Xiaomi as the Xiaomi Mi 5 has just gotten listed ahead of an official announcement next week.

If you follow our site, you have probably seen the Xiaomi Mi 5 mentioned a couple of dozen times. The handset has been one of the leakier incoming releases we’ve seen over the past year, and it’s also a device that has been headed towards a launch for quite some time. Well, next week we will officially see the Xiaomi Mi 5 up close and personal, but today we’re going to tell you what to expect under the hood.

A new image has surfaced that tells us almost everything there is to know about the Xiaomi Mi 5 specifications. While it’s not in our native tongue, once translated we know it will have a 5.15-inch display with a resolution of 1,920 x 1,080 and get its power from a Snapdragon 820. The RAM and storage capacity weren’t mentioned, but the cameras were. On the rear of the Xiaomi Mi 5, there is a 16 snapper with an LED flash, Laser Auto Focus, and OIS. The front-facing camera isn’t as fancy, but will be quite sufficient with a 4MP UltraPixel sensor.

In the connectivity department, the Xiaomi Mi 5 has all the usual suspects like Wi-Fi, NFC, and Bluetooth to go along with 4G LTE and a fingerprint scanner and a USB Type-C port. As with most handsets that hail from the region, you’ll get Dual SIM connectivity as well. The Xiaomi Mi 5 will draw its power from a 2,910mAh battery and will run Android out of the box.

Xiaomi will introduce the Xiaomi Mi 5 on February 24th, and we expect it to be a very popular device once it hits the streets with an expected price tag of around $300. You can rest assured we’ll keep you updated as more launch information emerges.