Samsung SM-T585 gets listed with octa-core chip and 4G

Benchmark listings are a great way to get the lowdown on a new device before it’s officially announced. Samsung had a new slate gets listed on a popular benchmarking site today, and we’re here to tell you what to expect from the Samsung SM-T585.

Samsung has more Android tablets than we can keep track of, and they will probably release at least a dozen more this year. That’s just how they roll. The Samsung SM-T585 is going to be one of them although it remains to be seen what lineup it will fall under. Wherever it lands, it is going to be a mid-range option as the specifications are nothing to wright home about. 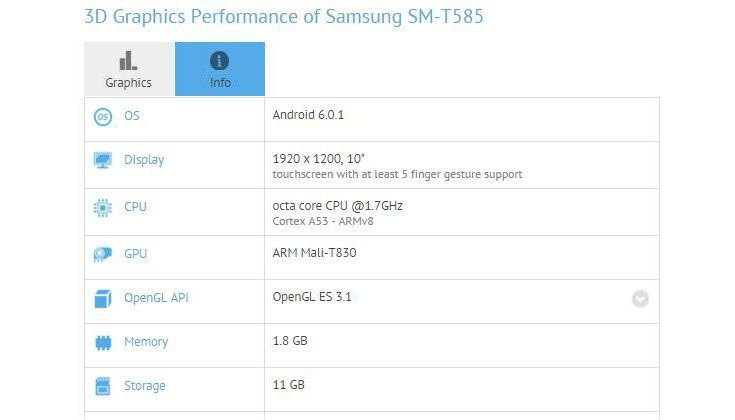 According to the GFXbench listing, the Samsung SM-T585 will have a 10-inch panel with a resolution of 1,290 x 1,200. The chipset is the 1.7GHz octa-core Exynos 7870, which will get a bit of a bump from 2GB of RAM. The storage is a bit underwhelming at 16GB, but should be expandable through a microSD card slot. Other features to note include an 8MP/2MP camera combo, Bluetooth, Wi-Fi, GPS, Android 6.0 and 4G connectivity courtesy of the Exynos chip.

At this time, there are far more questions than answers surrounding the somewhat mysterious Samsung SM-T585. We have no clue what it will look like or how big the battery is, two things that are important to many consumers. While it’s a mid-ranger and should be priced accordingly, that will be an obvious concern as well. We’ll keep you updated as we learn more about the Samsung SM-T585.