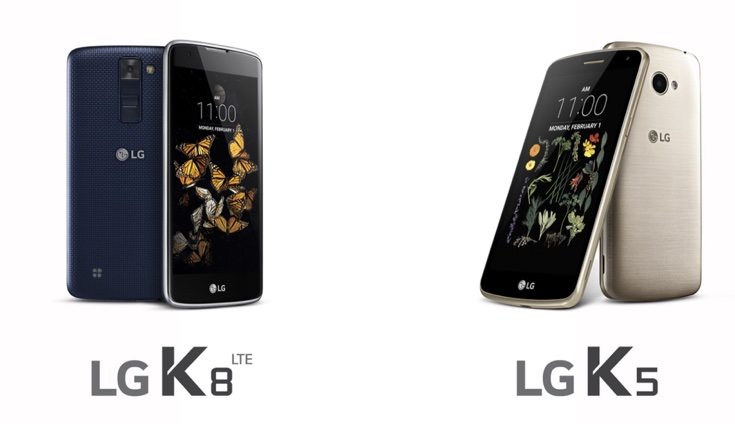 At the beginning of this year LG announced its new K Series of smartphones, and the LG K4, K7, and K10 have already been unveiled. Now the LG K5 and LG K8 specs have been officially announced and these new phones will be introduced to various global markets from this week.

The LG K Series is aimed at providing affordably priced smartphones offering decent camera experiences and a feature-rich UX. The latest additions share the same glossy pebble design language as the K smartphones that have already arrived. The new LG K5 has a sleek metallic build while the LG K8 has a premium design featuring 2.5D Arc Glass and woven back cover.

Specifications of the LG K5 include a 1.3GHz quad-core processor (chipset unspecified), and a 5-inch display with FWVGA resolution. It has 1GB of RAM, 8GB of internal storage (expandable via microSD), and a removable 1900 mAh battery. There’s a 5-megapixel rear camera and 2-megapixel front-facing snapper, and connectivity options include WiFi 802.11 b/g/n, Bluetooth 4.1, and USB 2.0. It runs the Android 5.1 Lollipop OS and comes in Gold, Silver, and Titan color choices. The handset measures 141.5mm x 71.6mm x 8.9mm. The LG K5 will release in key markets that include Europe, CIS, and Latin America, and will be known as the Q6 in Mexico.

LG K8 specs include a 1.3GHz quad-core processor and 5-inch In-cell Touch display with HD resolution. It has 1.5GB or 1GB of RAM (models vary) and microSD storage expansion. This one has an 8-megapixel rear camera and 5-megapixel front-facing shooter. Connectivity options include WiFi 802.11 b/g/n, Bluetooth 4.2, NFC, and USB 2.0. It’s juiced by a removable 2125 mAh battery and runs Android 6.0 Marshmallow. The LG K8 comes in Gold, Indigo, and White color options and the handset measures 144.6mm x 71.5mm x 8.7mm. This phone will release in regions that include Asia, Africa, the Middle East, CIS, and Latin America.

“We are aware of the diverse needs and wants of our customers around the world and our goal is to deliver the best products to meet their expectations. The K8 and K5 will be fantastic choices for anyone who is seeking a smartphone with great looks, great looks, at a great price.”

The company has not announced prices of these two new K Series smartphones yet, but we expect regional pricing to be announced as they become available for different markets. What are your first impressions of the new LG K5 and LG K8?