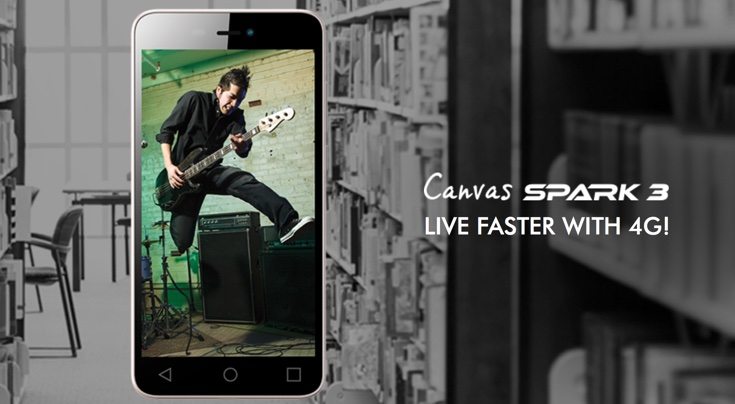 Micromax is a prolific smartphone manufacturer in India and the Canvas Spark 2 smartphone released at the end of last year. Today we have news of its successor, as the Micromax Canvas Spark 3 specs have been listed before the launch. Now that it has appeared on the company’s official website it’s likely to be available before too much longer.

Specifications of the Micromax Canvas Spark 3 Q385 include a 1.3GHz quad-core processor, 1GB of RAM, and 8GB of internal storage (expandable with microSD to 32GB). It has a 5.5-inch display protected by Corning Gorilla Glass 3 and with HD resolution of 1280 x 720, and it’s juiced by a 2900 mAh battery. Further specs include an 8-megapixel rear camera with autofocus and LED flash, and up front there’s a 5-megapixel shooter.

Connectivity is taken care of with 3G HSPA+, WiFi 802.11 b/g/n, Bluetooth 4.0, and GPS. We have to say there’s some ambiguity about this. The product page carries the words “Micromax Canvas Spark — Live Faster with 4G” (as shown in the image here) but when connectivity is listed it only mentions 3G. The phone also has FM Radio, a 3.5mm audio jack, and 1.5CC Box 2509 Speakers.

The dual SIM smartphone will be running the Android 5.1 Lollipop operating system. Pre-loaded apps will include Skype, Gaana, HIKE, and OLX. The new Micromax Spark 3 has some specs improvements over the current Spark 2. For example the Spark 2 had a smaller 5-inch display with lesser resolution, only 4GB of internal storage, a 5-megapixel rear snapper, and a smaller 1800 mAh battery.

Unfortunately the Micromax Canvas Spark 3 price has not been listed yet but we do know that it will be offered in a black color. You can take a look at the phone at the source below while we wait for availability and pricing. Does this new Micromax phone look like one that you might buy when it becomes available?