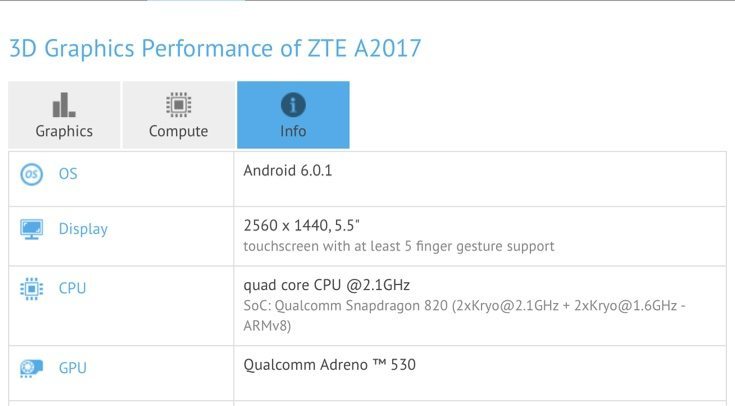 We often see the first signs of new devices when they turn up in benchmarking, and that’s the case with the Axon A2017 that has just appeared in a GFXBench filing. This is a ZTE Axon 2 flagship prospect although at this stage that cannot be confirmed. Whether it’s the Axon 2 or not, it’s certainly a high-end smartphone from the specs that have been revealed.

ZTE’s Axon smartphones have gained a reputation for having decent specs with competitive prices. The new benchmark spot is for the ZTE A2017, and because of the high-end specs it looks more than likely to be the next-generation ZTE Axon 2. The database entry shows this upcoming handset to pack a 2.1GHz Snapdragon 820 quad-core processor and Adreno 530 graphics.

Further specifications shown in the filing are a 5.5-inch display that has Quad HD resolution of 2560 x 1440, 4GB of RAM and 64GB of internal storage (51GB user available). The device has a 21-megapixel rear camera with 4K video capture, and up front there’s an 8-megapixel shooter. Another good sign is that in the benchmark testing the ZTE A2017 was running the latest version of Android, 6.0.1 Marshmallow.

The version in testing was a single SIM handset but that doesn’t rule out a dual SIM version that could also arrive. Current ZTE Axon handsets have included innovative audio and camera technology, so we’re likely to see some further developments with the next-gen version. So far there’s no news on when this ZTE A2017 might launch. However, now that it has appeared in benchmarking we should soon see further signs, such as sightings from various certification processes.

We’ll be keeping our noses to the ground to find out more details about the ZTE A2017, which could very well prove to be the ZTE Axon 2. Check back with us for more, and while we’re waiting let us know your thoughts on this benchmark spot.