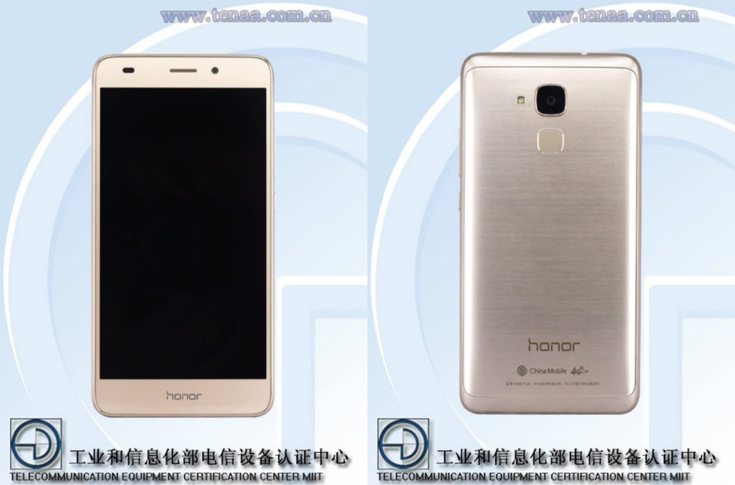 We’ve recently heard some murmurings about a new Huawei Honor smartphone on the way, and now the device has been spotted during certification. Some Huawei Honor 5C specifications have been disclosed by the TENAA appearance as well as some pictures of the handset. It’s thought that the phone will launch very soon.

TENAA filings often reveal details about upcoming smartphones before they go official. For instance we’re already reported today on the Meizu M3 that has also just appeared at the Chinese regulatory authority. Now the mid-range Huawei Honor 5C has stepped into the frame as a successor to the Honor 4C that launched last spring.

The listing shows that the Huawei Honor 5C is powered by a Kirin 650 64-bit octa-core processor and has a 5.2-inch Full HD display with 1920 x 1080 resolution. It has 2GB of RAM, 16GB of internal storage (expandable to 128GB with microSD), and a 2900 mAh battery. There’s a 13-megapixel main camera at the rear as well as a front-facing 8-megapixel shooter. The phone will be running Android 6.0 Lollipop skinned with Huawei’s Emotion UI at launch.

The images in the TENAA filing show a fairly standard looking handset with a finish that looks like brushed metal. On the reverse there’s a fingerprint scanner below the camera. The handset measures 147.1mm x 73.8mm x 8.3mm and weighs 156g. An April 28th launch date has previously been rumored, but unfortunately the certification spot doesn’t give us a release date. However, we usually see devices become official just after they appear at TENAA so this could still pan out.

Of course it’s always possible that another variant with more RAM and internal storage could also be in the pipeline although there’s no news on that yet. One thing that does seem very likely is that it will be a very affordable handset given the price of the Honor 4C in 2015. Would you be in the market for the Huawei Honor 5C based on what we know so far?

Via: Anzhuo (Chinese) and Android Headlines