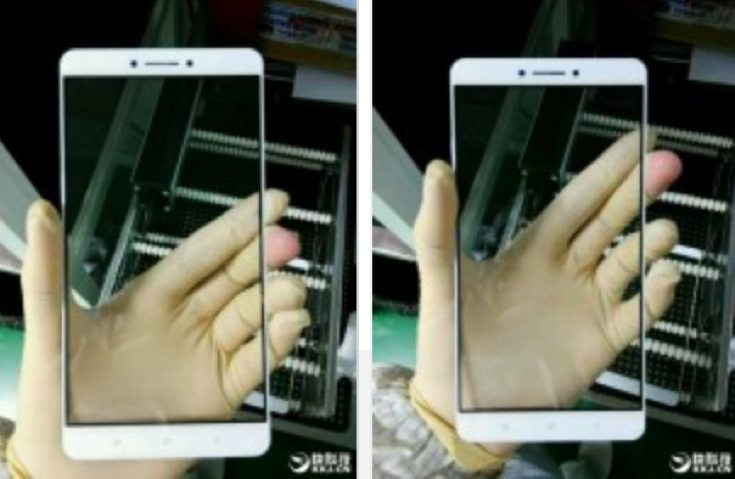 The Xiaomi Max is an upcoming smartphone and its name was recently chosen by poll participants. From the company’s name suggestions it was an easy guess that it would be a large handset, and now a Xiaomi Max whopping 6.4-inch display panel has leaked to reinforce that idea.

Xiaomi came up with four possible names for the new device, the Xiaomi Big, Plus, Pro, or Max, and the latter was the decided title. Rumors indicated that it would have a larger display than the Xiaomi Mi Note that has a 5.7-inch screen. Speculation from some sources even suggested a massive 6.4-inch display size, and lo and behold the new leaked images are of a 6.4-inch front panel.

The images appear to have come straight from the production line and show just how mammoth the Xiaomi Max is going to be. We we still don’t know the screen resolution. However rumors suggest Quad HD but take this with a pinch of salt for now. The panel component fits in with Xiaomi’s current design language with slim bezels, capacitive keys, and the earpiece where we’d expect.

A physical Home button incorporating a fingerprint sensor is missing, but sources say that the phone will have a fingerprint scanner on the reverse or incorporated into the display. The phone is said to have a metal build. Specifications are thin on the ground at the moment although a Snapdragon 820 chipset seems likely.

There’s no news on when the Xiaomi Max will be officially launched, although there have been murmurings of a May time frame. We imagine there will be a fair amount of interest in this upcoming phablet (more like a small tablet at this size), and we’ll bring further news as we hear it. Are you a potential buyer of the Xiaomi Max?