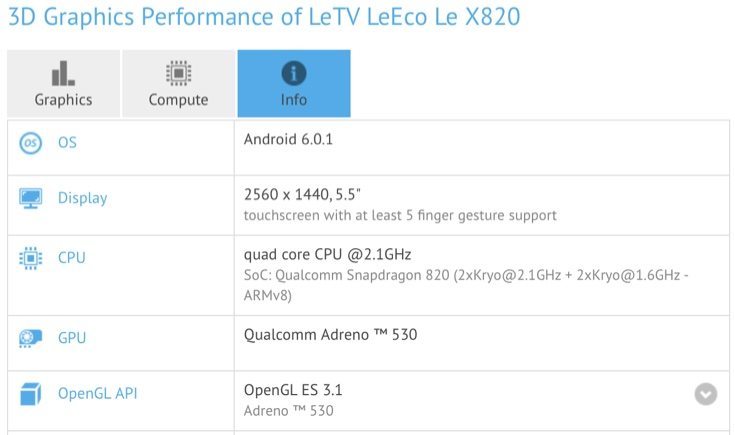 There’s plenty of anticipation for the next LeEco smartphones, and just yesterday we gave further news about the LeEco Le 2. Now it appears that LeEco Le 2 Pro specifications have been revealed by benchmark filings, and the differences between the two have become clearer.

In our report yesterday we told of a teaser for the upcoming LeEco Le 2 indicating it would be ditching the 3.5mm headphone jack. It’s expected that the phone could be revealed at an event to take place tomorrow (April 20), and rumored specs of the regular Le 2 include a 5.5-inch display with Full HD resolution, 3GB of RAM, and 32GB of internal storage. It’s also tipped that the phone will have a 16-megapixel rear camera and 8-megapixel front-facing camera, although at this stage the above specs are unconfirmed. However LeEco has confirmed that the Le 2 will pack a Helio X20 processor and there may also be a Snapdragon 820 variant.

The majority of these specs (not screen size) tie in with those in an earlier leak out of China that also suggested a 3100 mAh battery. It’s tipped that it will be a dual SIM handset and in another variant with 4GB of RAM and 32GB of internal storage. It’s also anticipated that it will have a metal build and feature a fingerprint sensor.

The hype is building up nicely for the official unveiling of the LeEco Le 2 and LeEco Le 2 Pro, and we hope to be able to bring you confirmed news very soon. Are you waiting for either of these new LeEco smartphones?