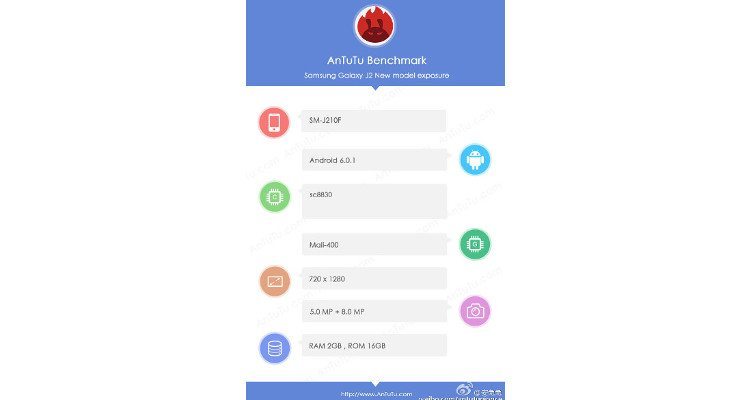 Sammy has more mid-range smartphones (and lineups) than you can shake a tablet at, and it’s a trend we don’t see changing anytime soon. The Samsung Galaxy J2 (2016) is a device that appears to be gearing up for an official release, and it’s just been spotted on the popular benchmarking site AnTuTu.

The OG version of the Samsung Galaxy J2 was announced last year before rolling out across the globe in September. While it was definitely on the low-end of the smartphone spectrum, it also had its advantages with features like LTE and a solid camera combo. It was safe to say we would see a sequel in 2016, and it looks like the Samsung Galaxy J2 (2016) will be a solid upgrade to the original.

According to the AnTuTu listing, the Samsung Galaxy J2 (2016) will have a slightly larger 5-inch display with an increased resolution of 1,280 x 720. That’s a big bump up, and the same can be said for the innards as you’ll get 2GB of RAM this time around and the storage capacity has doubled up to 16GB. The chip powering the handset is a bit underwhelming as it’s a quad-core Spreadtrum SC8830 clocked at 1.5GHz, but the rest of the specs more than make up for it including an upgraded 8MP/5MP camera combo and Android 6.0.

Are you thrilled with the Samsung Galaxy J2 (2016) specs if they are legit?