Oppo Find 9 specifications may have been revealed through Benchmark listing

Each week we see several devices pass through regulatory bodies and benchmark sites around the globe. This week is no different, and we’ve gotten a bit of a surprise with the Oppo Find 9 specifications which have just popped up through a new benchmark listing.

Oppo still isn’t a name known to many folks outside the smartphone world although they have millions of fans in certain parts of the globe. Their unique approach over the years is part of the reason for that, and it’s safe to say their fans tend to get excited when a new product debuts. Well, we may have one in the very near future with the Oppo x9007, a device believed to be a variant of the Oppo Find 9. 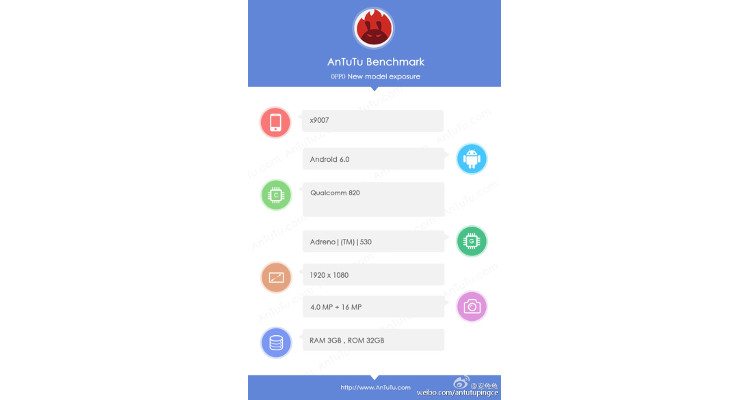 According to the listing on AnTuTu, the Oppo X9007 will feature an FHD display of an unknown size and sip its power from a Snapdragon 820. The chip will get some help from 3GB of RAM while the storage is listed at 32GB. Last but not least, is the camera combo which is listed at 16MP in the rear and 4MP in the front, and Android 6.0.

As we only assume the base model of the Oppo Find 9 exists but have no specs, it’s safe to say this is probably one of the variants based on the specifications. They certainly aren’t bad, but about what we would expect from a “lite” version of the Oppo Find 9, which means we could see higher spec’d variants show up as well. For now, you’ll have to take it all with a small dose of salt until the company shows us something solid on their unannounced flagship.

Are you still excited about the prospect of the Oppo Find 9?