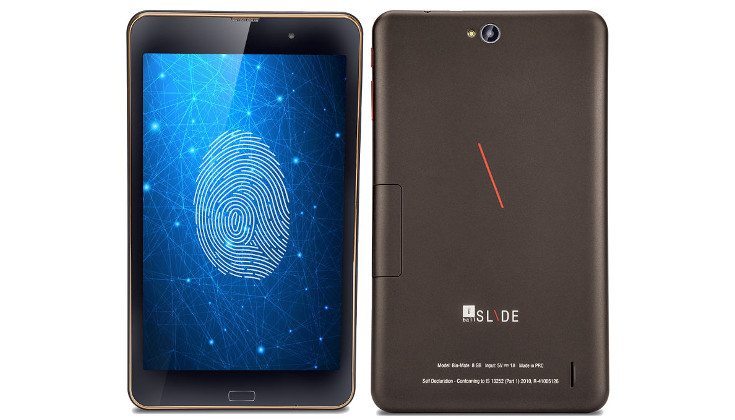 We haven’t covered anything from iBall since the beginning of last month, but they have just announced an interesting new smartphone in the iBall Slide Bio-Mate. As the name implies, it’s a slate from the company’s popular Slide lineup, but this time around you’ll be getting an additional feature.

Unless a new type of verification comes out of the woodwork within the next few years, it’s safe to say that fingerprint scanners are quickly becoming standard. While you can find dozens of handsets with sensors, the tech hasn’t quite made the transition to slates in the same fashion. The iBall Slide Bio-Mate is one of a handful of Android tablets with fingerprint authentication, and it’s just been announced for India with a price tag of Rs. 7,999.

In the looks department, the iBall Slide Bio-Mate is pretty average with a thick black bezel around the front and the logo on the back along with the camera sensor and flash. Yup, you’ll get a flash on this slate, and while the rear camera is listed at 5MP, they say it’s “enhanced” to 8MP through software. The front-facing snapper clocks in at 2MP, while the display is listed at 8-inches and carries a resolution of 1,280 x 800.

The processor powering the iBall Slide Bio-Mate will be a quad-core chip of unknown origins that’s clocked at 1.3GHz. There will be 1GB of RAM to help move things along while the storage is listed at 8GB, but expandable through the usual means. Connectivity option will include Bluetooth, Wi-Fi, GPS, and 3G HSPA+ along with the aforementioned fingerprint sensor. The Dual-SIM iBall Slide Bio-Mate is powered by a 4,300mAh battery and runs Android 5.1 out of the box.

The iBall Slide Bio-Mate is an interesting option as it’s a bit weak under the hood, but still have some solid features like the fingerprint sensor, 3G, and the rear camera. It’s also affordable for consumers in the region as it carries a price tag of Rs. 7,999 which equates to around $120 bucks.