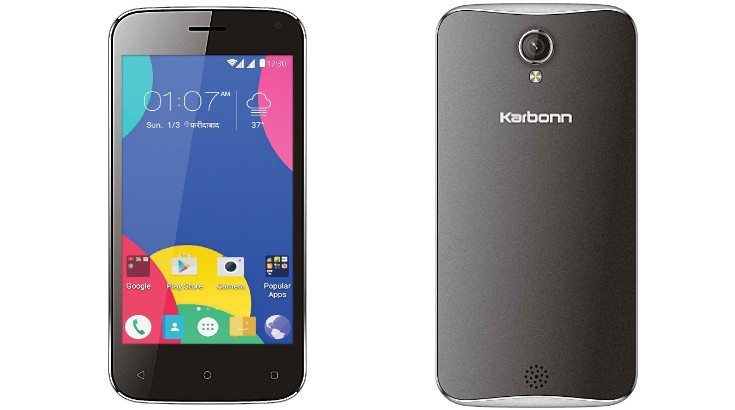 Karbonn has been relatively quiet in the first half of 2016, but they have introduced a new handset for India today. The Karbonn A91 Storm is an entry-level device, and it is ready to roll through various retailers in the country for Rs. 2,899.

Entry-level is a term that makes spec junkies twitch whenever it comes up — and not in a good way. Whenever you hear that phrase, weak specifications are sure to follow and that’s the case with the Karbonn A91 Storm. It’s an affordable handset geared towards consumers on a budget, but still has enough pop to get the job done if you can live without a few bells & whistles.

The majority of the smartphones we cover fall in the 5-inch range or larger, but Karbonn has gone the opposite direction for the Karbonn A91 Storm. The Storm sports a 4-inch display with a resolution of 800 x 480, which is quite a bit smaller than most smartphones these days. As for the horsepower, the pocket-friendly device will pull its power from an unnamed quad-core chip clocked at 1.2GHz and backed by 512MB of RAM.

Keeping with the low-spec’d theme, the Karbonn A91 Storm will have 4GB of storage under the hood, which is thankfully expandable through the usual means. The rear camera is listed at 2MP with an LED flash, while the front-facing snapper clocks in at 0.3MP. Other options to note include Wi-Fi, Bluetooth, 3G, and a 2,200mAh battery. The Dual SIM handset will run Android 5.1 out of the box.

The Karbonn A91 Storm isn’t the type of device that will impress your friends and neighbors, but it is very affordable at Rs. 2,999 which shakes out to around $44 bucks in the states. The handset is currently listed on the company’s official website, but available in Blue, Black, and White through Amazon.in.