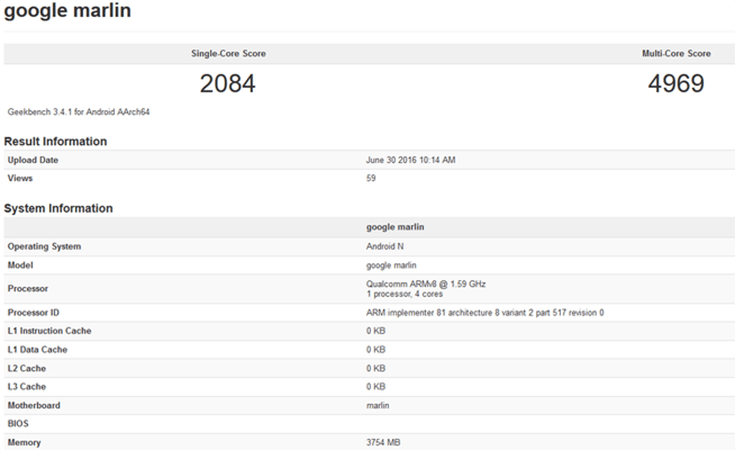 HTC seems to be on a roll after being given a chance to produce this year’s Nexus devices. They’ve already made one, the HTC Google Nexus One, back in 2010. But this year, they are coming out with two HTC devices along with a tablet too. The rumors surrounding the HTC Nexus M1 have been doing the rounds lately and we already have a lot of rumored specs. But, the phone came up on Geekbench, which confirms a few of the rumored specifications.

The phone is still codenamed as Marlin, and it’s called Google Marlin on the Geekbench posting. Under the hood of the HTC Nexus M1, it is rumored to be the legendary Snapdragon 820 SoC clocked at 1.59GHz, which is quite lower compared to its maximum clock speed. There is also 4GB of RAM to go along with the SD820.

Apart from this, there is nothing much revealed on the Geekbench posting. Everything else is left to our imagination, but there is one that is really surprising, but at the same time exciting. HTC Nexus M1, according to the posting, comes with the latest Android 7.0.1 a.k.a. Android Nougat. You can read more about the new version here.

Other rumors about the HTC Nexus M1 include a 5.5-inch QHD AMOLED display, an internal memory of 32GB which can be expanded up to 128GB and a rear mounted fingerprint scanner. There is also a 12MP rear camera and an 8MP selfie camera. A USB Type-C port placed along with the two speaker grilles.

The HTC Nexus M1 is just one of the two phones from HTC. There is also the HTC Nexus S1 which comes with a 5-inch display. The phones are expected to arrive in September. The prices are unknown as of now, but it is expected to be around the $500-$600 range.