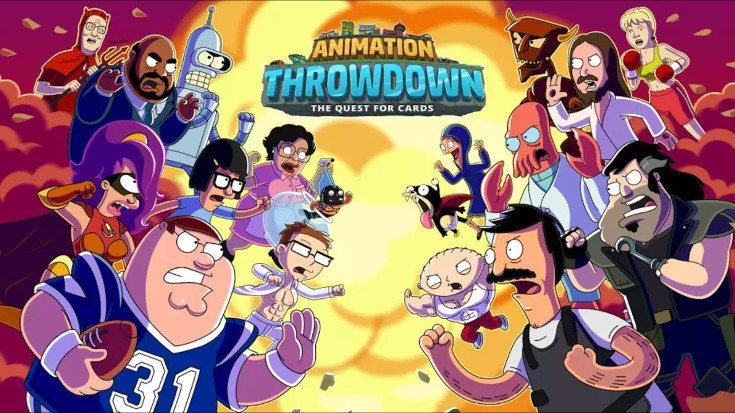 Enjoy a good card battling game? We do, and mobile gamers got a doozy last week with Animation Throwdown The Quest for Cards. As the moniker implies, it’s a game from the folks at Fox, but it’s one that involves some of the most popular characters in animated history. 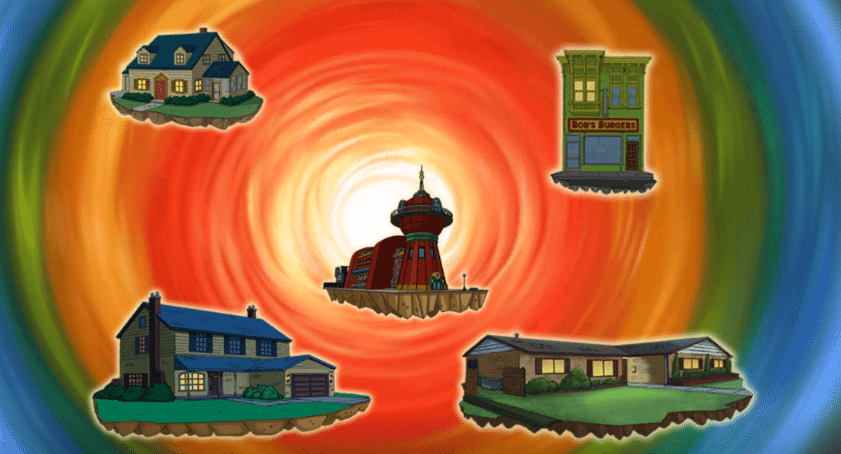 If you are of a certain age, you can probably remember when The Simpsons was the only thing around of its ilk. The long-running toon is not a part of Animation Throwdown The Quest for Cards, but it’s safe to say they helped usher in all the shows featured in the game. That currently includes Futurama, Family Guy, American Dad, King of the Hill, and Bob’s Burgers.

Like Adventure Time Card Wars and dozens of CCG’s before it, Animation Throwdown The Quest for Cards pits you against others in card-based battles. In this case, it’s characters from the aforementioned shows, and the cast is vast. Initially, you choose your main leader, but can unlock new ones as you level up through battles. Unfortunately, the cards are mixed together and not tied to your character which does add to the mash-up theme but takes a little away as well. 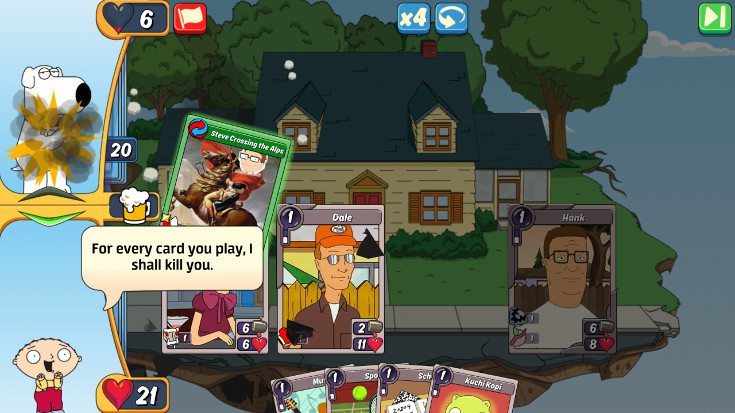 The Animation Throwdown The Quest for Cards gameplay is easy to pick up on, but surprisingly tricky once you learn combos. In a nutshell, it plays like most CCG’s in a turn-based fashion and you can pair player cards with skill cards to form combos… once you’ve learned them. Once you get past their initial layer of Defense, your hits take a chunk from their leader’s health and whoever goes to zero first is deemed a loser. That’s the simple version, but there’s a nice tutorial to walk you through the finer details as you can see from the screenshot below. 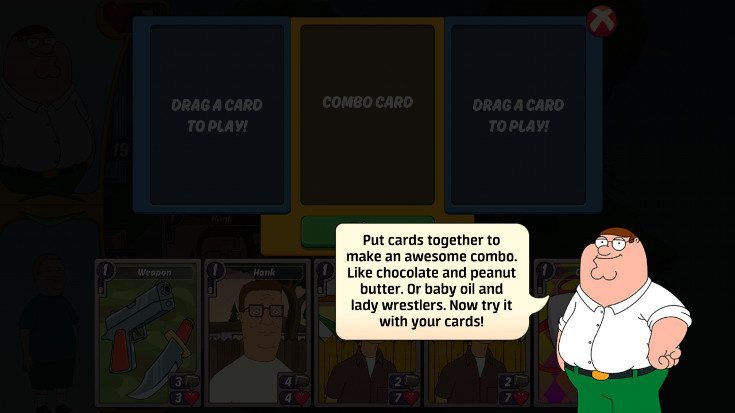 Once you have mastered the basics of battle, getting around in Animation Throwdown The Quest for Cards is fairly simple. The main map is laid out with the Arena, Shop, Deck, Adventure, and Research. The sidebars aren’t too busy and hold your Quests and Guilds along with buttons for perks, alerts, and settings. As for the guilds, there’s not a lot going on at the moment, but you do get additional perks for joining and being active.

Battles take place in the Arena or Adventure Mode, and each is unique for several reasons. PVP helps you unlock new characters to use in the game along with giving you a chance to win deck cards and coins. There’s an energy bar for each mode, which can slow things down, but it’s not too horrid of a setup. 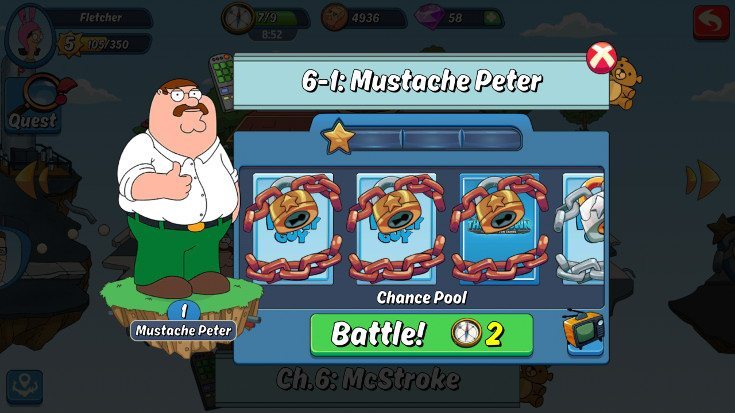 Adventure Mode breaks things down into chapters consisting of three battles each. Each battle is a boss character, and the more you beat them the higher your chance pool is for better rewards. Yeah, it’s a little grindy, but worth it for the rewards and Animation Throwdown cards of which there are many.

The Deck section is simple to use and where you’ll piece together your deck of destruction. Adjusting your deck is a breeze, and there is an Auto-Deck feature to go along with a Recycle Bin for unwanted cards. The shop is where you buy new packs with coins or gems. While the “Basic” packs are fairly priced with coins, the better packs are going to cost you a small fortune in gems. 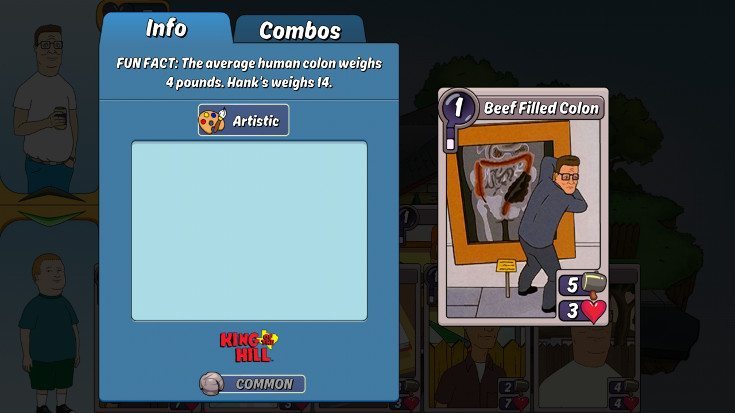 A Rare pack with two cards (1 rare) is 350 gems which equates to around $4.99 as the cheapest pack is 400 gems. That said, if you’re a big spender or have a serious IAP addiction, you can plunk down $100 bones for 10,000 gems. There are also special packs, and we would have snapped up the pack with “Master Robaire” if it wasn’t $9.99 although it’s actually a deal if for Bobby fans as it also comes with 800 gems.

Last but not least is the Research Tab. This is where you learn combos, which consists of placing cards into Fry’s chamber and waiting for hours. Yup, this is where those gems can come in handy as the better the combo, the longer the wait. The results can be quite astonishing and powerful, and we’ve laughed more at the results than anything else in the actual game — random character quotes and animations aside. Therein lies the rub my friends… 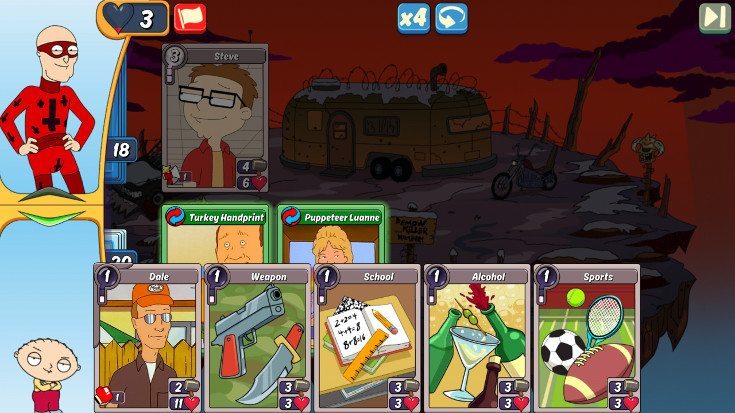 As slick and polished as Animation Throwdown TQFC is, it suffers from a major drawback. The music, animations, and punchlines are great, but there is no voice talent involved. Not one line from Hank or Bobby, no quips from Bertram, and Glurmo was all smiles but no talk. It’s a little disarming initially, but we’re guessing there are several financial reasons they are absent.

While Animation Throwdown The Quest for Cards is missing a few notable shows, it’s a massive undertaking to put all these toons together. There’s a little something for (almost) everyone, and while the lack of voice talent is a huge drag, it’s still a great game to kill some time with.

There’s a lot to do for collectors and completionistsÂ as well between battling, fusing cards, and upgrading your favorites. Â Considering Adventure Mode alone has 75 stages, it’s also not the type of game you’re going to finish quickly… we’re coming for you Patch Boomhaur… 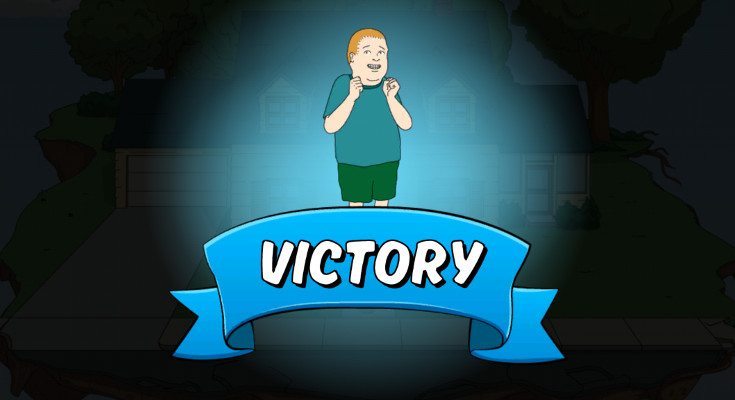 Animation Throwdown The Quest for Cards is a freemium game with its fair share of IAP’s, but they aren’t required to play. It’s one we highly recommended if card-battling games or the toons in the title and you can get it for free on Google Play or the App Store.