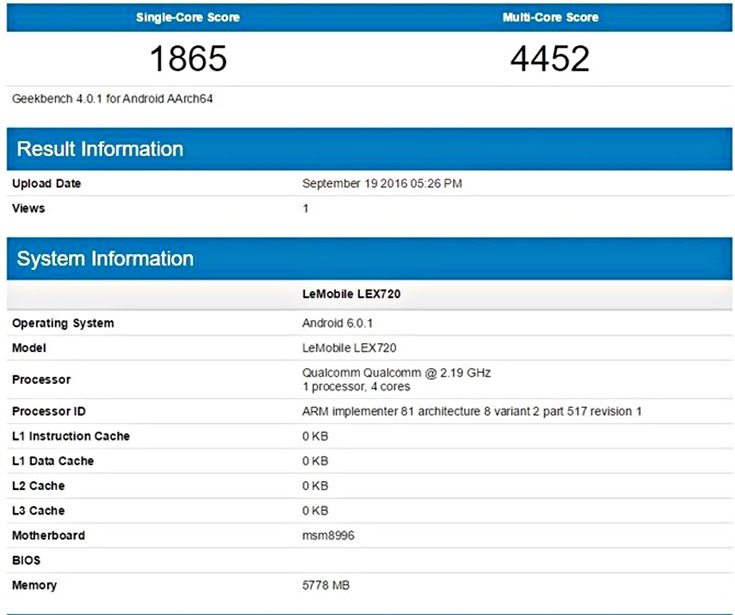 While the OnePlus 3 was one of the first phones to come out with 6GB of LPDDR4 RAM, we already have rumors about phones sporting 8GB of RAM. The frontrunners to this rumor are the LeEco Le Pro 3 and Xiaomi Mi 5s Plus. Information about both these phones have leaked online several times pointing to the 8GB variant. Today, the Le Pro 3 hit Geekbench. Though it confirms some of the rumored specs, the variant that passed through Geekbench is the 6GB variant. LeEco might be trying hard to cover up the higher-end Le Pro 3, but the launch is expected to take place tomorrow.

There have been several leaks about the Le Pro 3 before. Â The AnTuTu score of the phone was 163,456, but that was the 6GB variant as well. You can check out the other leak of the phone here. It is also one of the first few phones to flaunt the Snapdragon 821 SoC.

The Geekbench listing confirms the Snapdragon chipset. The phone will also run Android 6.0.1 out of the box.Â The single-core score is 1865, while the multi-core score is 4452. There are also suggestions that the actual score would be higher as the new version of Geekbench scores the chipsets lower that their actual scores.

The base variant will come with a 4,070mAh battery while the top end model will come with a massive 5,000mAh battery. If everything materializes, we might be seeing one hell of a flagship tomorrow. The LeEco Le Pro 3 would definitely be one to watch out for.