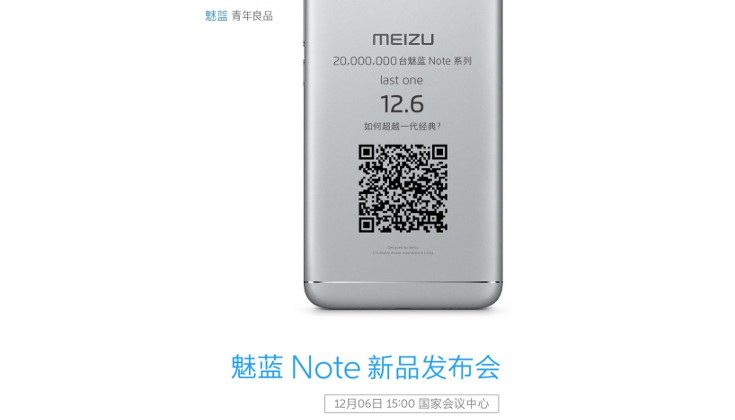 Meizu and Xiaomi are two of our favorites when it comes to affordable tech from the Far East. The former is set to announce their latest fairly priced phablet in the Meizu m5 Note, which is going to debut on December 6th in China.

We knew the Meizu m5 Note was going to become official in the near future. Many assumed that would happen this month, but a new teaser says otherwise. Meizu has dropped a promo for the handset which lets us know an announcement is coming on December 6th. While the tease doesn’t show us the front of the smartphone, we do get to see that backside again which gives us further confirmation on those specs.

The Meizu m5 Note will be in the phablet class and has three different variant models. All have 5.5-inch 2.5D displays with a resolution of 1,920 x 1,080 and the Helio P10, but the RAM and storage will vary. The base model sports 2GB of RAM and 16GB of storage while the next step up is 3GB and 32GB. As for the premium model, you will get 4GB of RAM and 64GB of storage under the hood. All three variants allow for expansion through a microSD card slot as well.

On the rear of the Meizu m5 Note sits a 13MP snapper with PDAF and a Dual-Tone LED flash. Seflies will be handled by a 5MP sensor. Connectivity options include Wi-Fi, Bluetooth 4.1, GPS, 4G VoLTE, a fingerprint scanner and Dual SIM slots. The battery is listed at 3,920mAh/4,000mAh and the handset is listed as running Android 6.0 with Flyme OS 6.0 on top.

There is a good reason folks have been excited for the Meizu m5 Note release date to arrive – it’s affordable. While we don’t know the Meizu m5 Note price just yet, all will be made clear next week or possibly sooner if the rumor mill has its way.