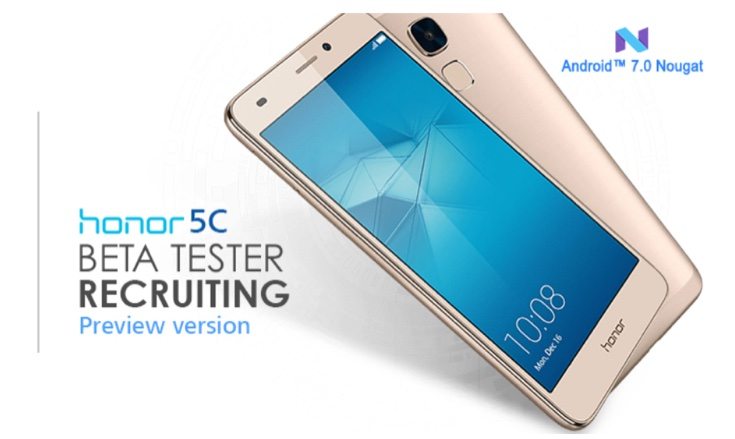 It’s always satisfying to hear of further Android OS updates rolling out and Huawei has just issued some interesting official news for owners of one particular smartphone in India. If you have the mid-range Honor 5C you can register now for the Honor 5C Android Nougat beta update for India. To be in with a chance to enjoy the preview, read on.

The Huawei Honor 5C smartphone launched in China in the first half of last year running Android 6.0 Marshmallow skinned with EMUI 4.1. The device was priced competitively, and so it’s good to hear that users in India will now get a chance to test run the Android 7.0 Nougat update.

Chinese company Honor made an official announcement today, only for the Honor 5C (model NEM L-22) for the India market. The registration period comprises a first beta release for 50 users and a second beta batch of 100 users. Honor notes that users should ensure their device is the NEM-L22C675B140/B151 version, before applying to take part in the beta program of the Android N update.

Those who take part in the BETA Test program will receive an OTA (over-the-air) update for the latest beta version of EMUI on availability. If this applies to you it’s worth noting that this is a preview version that may not be stable for everyone and does not contain all features. Therefore it’s worth backing up data before you begin. Nevertheless some Honor fans will appreciate an opportunity to get a taste of what’s on offer and help to identify any bugs. It’s also possible to opt out of the beta testing at any time.

Benefits and privileges for participants include early software pre-release priority access, as well as a chance to receive special invites for new product launches and fan meets. There will also be an opportunity to receive special rewards pertaining to BETA program performance. To check out the full details of the recruitment program and information on features head to the Honor source below. You’ll also see a registration link provided. Do you want take part in the Honor 5C Android Nougat beta?