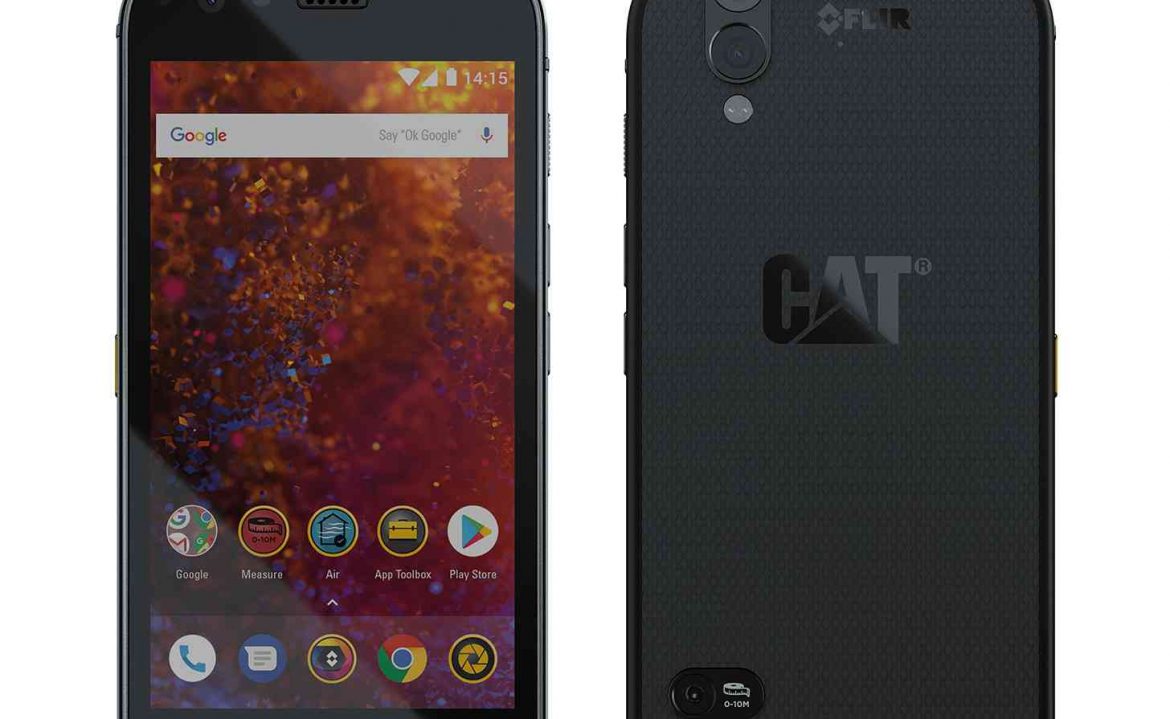 Cat is probably not the first name you search for when you’re buying a new smartphone. The company is probably one of the most famous in the construction safety and heavy machinery markets, but they’re also expanding their brand to the smartphone world. And yes, you’ve probably guessed it – Cat’s phones are not stylish or appealing as from other competitors. Their main selling point is the durability and safety of them, a feature that you cannot get on your $1000 iPhone X. At MWC 2018 in Barcelona, Cat announced their latest device – the Cat S61. Let’s take a look at it!

Let’s start with the first thing you see – the design. As I said before, Cat phones are not built for looks, and the S61 isn’t anything different. Starting with the display, you will find a 5.2” display with Gorilla Glass 5. The panel is bright, and color reproduction is good. Under the screen you will find the capacitive buttons, slightly raised up. They’re pretty big and tactile, so you can easily click them with your gloves on. On the back, you will find the camera setup, with the big Cat logo in the middle. The back is made from plastic, but its big and quite grippy, and the side is made from an aluminum frame. So, if you’re prone to many drops or work in a place that needs a durable phone, the S61 could be your best choice.

Continuing on to the performance, you’re going to get pretty good hardware inside the Cat S61. Starting with the processor, the device features the Snapdragon 630 SoC. It’s a midrange one, so you won’t get the same performance as the 800 series. Nevertheless, it’s still snappy and should handle most of the tasks you throw at it. It is accompanied by 4GB of RAM and 64GB of internal storage. Heavy multitaskers will have no problems with this device. Finishing the hardware department with the battery, the S61 will feature a big 4500mAh one. You’re easily going to get two days of use before you need to top it up.

Continuing on to the cameras, the Cat S61 features a 16MP shooter on the back and an 8MP shooter on the front. Both are great, and they’re placed in the little hump on the top of the device. Again, design and looks are not features for Cat devices. The most interesting parts in the sensors are the thermal camera and the laser distance measurement. Both sensors are placed on the back, and they can be found useful in many different situations. Aside from those, you’re also getting an air control sensor that can measure the air quality around the device. The average user might not need this, but for the others in heavy working environments, it could save their lives.

Finishing with the software, the Cat S61 is going to feature a stock version of Android Oreo 8.1. This is good to see, especially when other competitors like the Galaxy S9 come with older versions of the operating system. Cat also promised an update to Android P, when it comes out.

The Cat S61 is going to be available for purchase in the second quarter of this year. It will be priced at 900 euros, which is quite expensive. But, for those that want an extremely durable smartphone without sacrificing a lot of performance, this could be the device.

So, what are your thoughts on the Cat S61? Share them in the comments below.