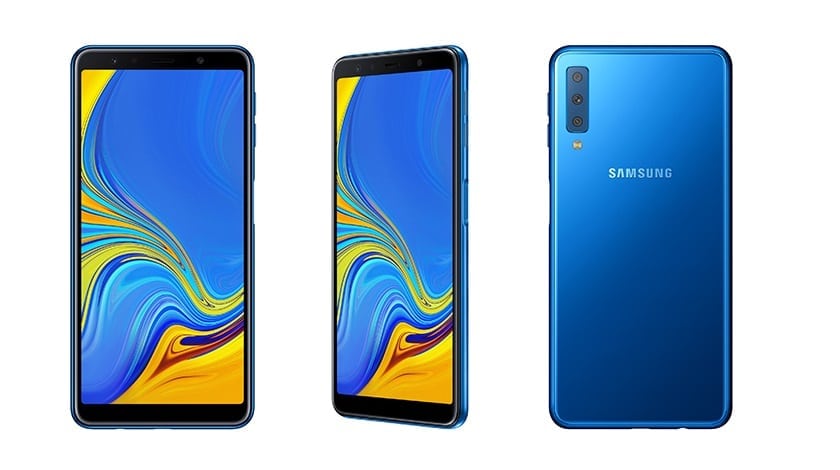 Samsung is without any doubt one of the biggest smartphone companies in the world. The Galaxy S9 and S9 Plus are some of the best smartphones of the year. Furthermore, the recently announced Note 9 also makes waves in the public, as being their first premium smartphone to reach the $1000 mark. However, there are also options for all of the other customers that cannot pay the premium price for a flagship. The A series is the company’s efforts at a midrange smartphone that doesn’t cut down much of the features from a premium one. And the recently announced Samsung Galaxy A7 is an example of that. Let’s see how!

Starting with the design, the Galaxy A7 is staying true to making the A series looking premium. The device feels premium in the hand, with the rounded edges especially expressing that. It comes in four different colors: black, blue, gold and pink. On the front, you will find the 6” Super AMOLED display with 1080 x 2220 resolution and 18:9 aspect ratio. And you won’t find a notch here, as tall screen has been Samsung’s signature for quite some time now. Rotating to the back, you will find the camera setup in the top corner. The Samsung logo sits proudly in the middle, while the fingerprint sensor is being moved on the side.

On the performance side of things, the Samsung Galaxy A7 is clearly a premium mid-ranger. Starting with the chipset, the device comes with a 2.2GHz octa – core processor. It’s probably the biggest downside of the whole device, as competitors like Honor bring their best chipsets in the same price range. However, you’re paying the premium here for the brand. Nevertheless, it should handle most everyday tasks swiftly and without any problems. For memory, you have the options of 4 or 6GB of RAM and 64 or 128GB of internal storage. Finally, the A7 comes with a 3300mAh battery that should endure through your day, depending on your use.

The camera setup is the most interesting part of the A7, as it’s being the second device with a triple camera setup on the back. The Huawei P20 Pro got that trend started, and we already have many rumors about other companies jumping on it. Here, you’re getting a primary 24MP lens, an 8MP 120-degree ultra-wide lens, and lastly, a 5MP depth sensor lens. The aperture of all of these lenses are f/1.7, f/2.4 and f/2.2, respectively. We’re expecting a decent camera setup here, and it could be the device’s biggest selling feature. Same thing remains true for the front 24MP f/2.2 shooter, which should be perfect for all of your selfies or vlogs.

Finishing with the software, the device is going to run Android Oreo 8.0, with Samsung’s own skin on top of it. It will keep many of the familiar features as seen in the S9 or Note 9, depending on the markets.

The Samsung Galaxy A7 will be available in select European and Asian markets at launch, with more to follow up in the upcoming months. Unfortunately, there are no details about the price yet. We’re expecting it to be around the same range as the previous A7, or that’s around $400 to $500.

So, what are your thoughts on the Samsung Galaxy A7? Share them in the comments below.