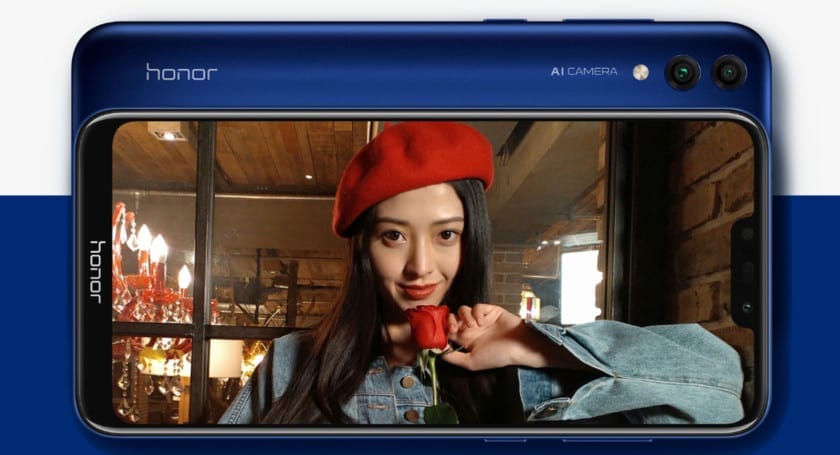 Huawei’s sub-brand, Honor, has been doing extremely well in the midrange market. They offered a lot of great smartphones for many different budgets. That means premium looks, fast hardware and many useful features – for a lower price than the competition. We recently saw some great devices from them, like the Honor Play which is focused towards gamers. Their most recent device, the Honor 8X is a great midrange smartphone that packs a lot of things found on premium Huawei devices. Now, the company announced its lower sibling, the Honor 8C. Let’s see all the details about it!

Starting with the design, the Honor 8C looks a lot like its bigger sibling. There are some changes though. The back is made from aluminum instead of glass, which is becoming a trend now on budget devices. On the front, you will find the 6.26” display with 720 x 1520 resolution and 19:9 aspect ratio. It does feature a notch, and it’s similar to other Huawei / Honor devices – meaning it’s not that big. The bezels are quite small though, with only the bottom chin being the biggest one. Rotating to the back, you will find the camera setup in the same placement as the 8X. The “AI camera” logo is placed next to them, with the fingerprint sensor right in the middle. The 8C will come in three different color options: Midnight Black, Aurora Blue and Platinum Gold.

Going inside the device, we can clearly state that it’s an entry-level midrange device. Starting with the chipset, the device will carry the Snapdragon 632 processor. The interesting part is that this could be the first device to ship with that chip. It’s clocked at 1.8GHz and has 8 cores, giving you great performance for all of your moderate tasks. For memory, the device will come equipped with 4GB of RAM and 32 or 64GB of internal storage. A MicroSD card slot will be available, so you can expand it further up to 256GB. Finally, the device will come with a chunky 4000mAh battery. It should easily last you up to two days, depending on your usage.

Switching over to the cameras, the Honor 8C will come with a dual camera setup on the back and a single shooter on the front. Starting with the back, you have a main 13MP shooter with f/1.8 aperture and a secondary 2MP depth sensor with f/2.4 aperture. The camera should be decent, with good color saturation and dynamic range. In low lightning conditions it should underperform, but that is normal even for some flagship devices. For the front, the device comes with an 8MP shooter with f/2.0 aperture. It should be more than enough for all of your selfies and video calls. Speaking of video, the device can shoot up to 1080p in 30 fps.

Finally, the 8C will come with Android Oreo 8.1, behind Honor’s EMUI skin. The skin packs a lot of useful features, but it has a hard learning curve.

The Honor 8C should ship by the end of this month in Asia, with more markets to come in the next months. There is no official price yet, but we’re expecting it to be around 170 euros.

So, what are your thoughts on the Honor 8C? Share them in the comments below.