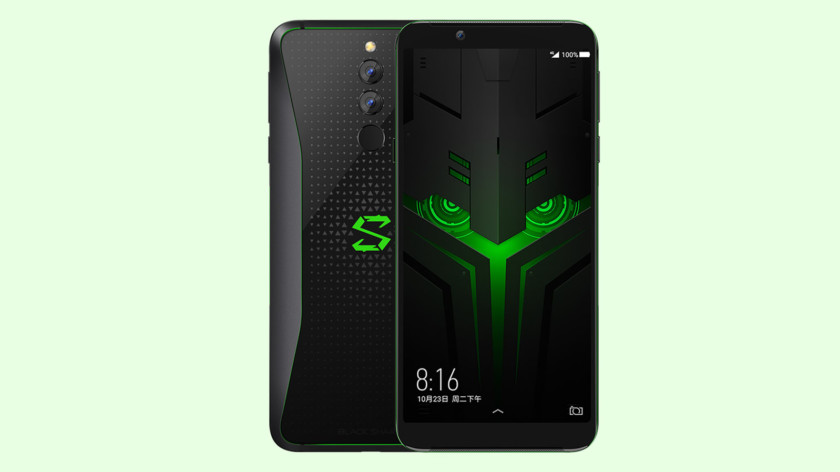 Last year, Razer, one of the best companies for gaming hardware in the world, entered the smartphone market. Their device, known simply as the Razer phone, was the company’s take on a gaming smartphone. And with the recent successor to it, the Razer Phone 2, we know it succeeded. However, it also brought a wave of other gaming smartphones from prospering manufacturers. Xiaomi was one of them, and their device, the Xiaomi Black Shark, had huge success in Asia. Now, we have the successor to it – the Xiaomi Black Shark Helo. Let’s take a closer look at it!

Starting with the design, there are some slight differences compared to the original Black Shark. First, the cameras are placed vertically in the middle of the top. The fingerprint sensor has been moved from the front to the back, right under the camera setup. The curves are similar, with the difference of the added glass on the back. Also, the device is equipping RGB lightning in the logo on the back and on the sides. You can tweak them to your desire, and they can also blink on incoming notifications. On the front, you have a 6” AMOLED display with 1080 x 2160 resolution and 18:9 aspect ratio. It’s still notch-less, which is fine when you consider that you need the bezels to grip the device when gaming.

Going inside, you will see that the Xiaomi Black Shark Helo is packing all of the latest hardware components. Starting with the chipset, Xiaomi went again with the Snapdragon 845 processor. Accompanied by the Adreno 630 GPU, they should handle all of your long gaming sessions without any problems. For memory, you have many different options. The 128GB internal storage version comes with 6 or 8GB of RAM, while the 256GB one comes with whooping 10GB of RAM. That will handle multiple games running in the background, so you won’t run into any issue’s memory-wise. Finally, the device comes with a 4000mAh battery, good enough to last you through those long gaming sessions.

Jumping to the cameras, you have a dual camera setup on the back and a single shooter on the front. Starting with the back, you have a primary 12MP sensor and a secondary 20MP telephoto sensor for 2x zoom. Both have f/1.8 aperture and should take great pictures with good dynamic range and color saturation. On the front, you have a single 20MP shooter with f/2.2 aperture. It’s perfect for all of your selfies or video streaming. Speaking of video, the device can shoot up to 2160p in 30fps.

Finally, the Xiaomi Black Shark Helo runs on Android 8.1, with a custom version of MIUI on top of it. It packs in a lot of features aimed at gamers, such as the Gamer studio that lets you tweak different hardware settings. It’s heavily customized though, so keep that in mind.

The Xiaomi Black Shark Helo will be first available in China, with more markets to follow up in November. Prices start at ~$461 for the 6GB RAM model and ~$504 for the 8GB RAM model. There is no information about the price for the 10/256GB model.

So, what are your thoughts on the Xiaomi Black Shark Helo? Share them in the comment below.