Phones Review and the Symbian Smartphone Show 2007 Lowdown: Part 1 Getting There

Right first of all my colleague and myself had to get there from Farnborough in Hampshire and being that I do not travel on public transport normally was kind of mind baffling at first, but to tell you the truth it was easier than expected. Ok so we got a train from Farnborough Main train station at 7:22am and what should have been a 46 minute estimated time of arrival in Waterloo, London actually took 1 hour 5 minutes due to signaling problems. Nether the less the journey was pretty good.

We arrived at Waterloo, London and then had to get to the undergrounds Jubilee Line heading towards Canning Town which was very easy to find, now this tube/train whatever you wish to call it was mayhem. As my colleague and myself got to the Jubilee line I jumped onto the tube which was well to put it bluntly a bloody nightmare it was jam packed with other commuters, as I jumped on this transport the tube/train doors shut which banged my head senseless and this happened because we was packed in like sardines in a tin, my colleague was left behind at the platform because he could not get on this train quick enough (was no room anyway). I tried to call him on his mobile phone but obviously being so far underground could not get a signal on my phone (they should put mobile phone masts under there or something), luckily enough he knew where to get of to meet me. When we got of this tube at Canning Town we then had to get the DLR to Customs House which was 2 stops, these 2 stops took about 3 minutes if that. 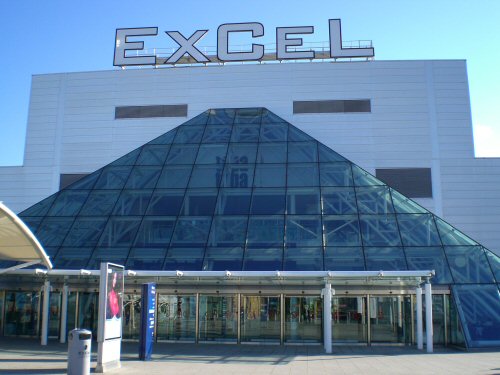 When we got of at Customs House stop it was just a short walk which took literally 2 minutes and we were outside of the ExCel London Centre where the show was being held. (Excited).