Google OS also known as the Android is announced

Gphone is Google’s own cellphone and news of this has been somewhat vague of late; however, the Gphone talks have slowly turned into talks about a Google mobile OS, and yesterday’s official announcement makes things a little clearer.So, here are a few facts. Google will not be making a Gphone by themselves, instead Google has developed a Linux based open source mobile OS named Android. As with all things, to gain speed the OS needs the correct hardware, and thus a new hardware platform needs to be developed. With this in mind, Google involved some of the major hardware companies for this project, and thus the Open Handset Alliance is born.

This experiment by Google called the Open Handset Alliance includes for 33 major players in the world of hardware and software, which include the likes of Microsoft, Apple, and Nokia. So finally everything becomes clear, there is to be no Gphone, but many GphonesÂ  by manufacturers such as Samsung, LG, and HTC, with HTC being the only manufacturer to date with a rough launch date, which will be no earlier than the second part of 2008. 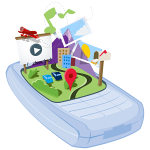