The iPhone has all the hype in the world which is good so there is only one thing to do, give it more hype. The Apple iPhone needs the Mythbusters or does it? The boys from the popular Discovery channel TV Show called MythBusters had to do something with this amazing little device and that is exactly what they did. 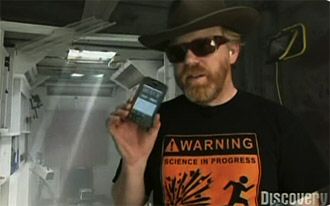 Adam Savage the most talkative and childish one who is my favourite apparently uses the Apple iPhone stopwatch feature which is part of the Clock App to keep time in an effort to bust or confirm urban and popular myths.

The urban myth today is “Does using an iPhone make Adam hip and cool? Seeing as he is ginger and he stands out in the crowd with his mad ways which is all cool I do not personally think the iPhone makes him any cooler or worse come to that.

What do you think “Does using an iPhone make Adam hip and cool?