Sure the U.S has a Boot Camp for bad kids but is one really necessary for mobile phone addiction among the young people of Korea.

A group of people called School Beautiful Movement with the help of Korea Agency for Digital Opportunity and Promotion (KADO) has launched a program on the proper use of mobile phones.

12 schools in the area are taking part in a program for the next two months in which they will speak out about their addictions and try and overcome the problem. 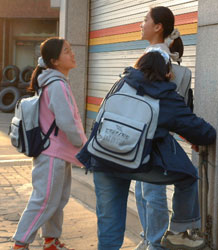 The schools taking part in the program will have phone lockers on hand to block phones if the students volunteer to it during in class time, they think this will cut down on improper use.

Here are some statistics that show the use of mobiles according to the KADO on students aged between 14 and 19 in 2005: 90 percent had mobile phones, 43.7 percent of teenagers had conversations with their friends through text messages during lectures and 38.2 percent sent more than 1,000 text messages per month.