Seems like Apple want to patent pinching, and have filed for patent with the USPTO, this patent could take up to 4 years or more though as theÂ patent filer has to demonstrate, “a new and useful process, machine or a composition of matter.” So does Apple’s multi-touch pinching gesture actually qualify? 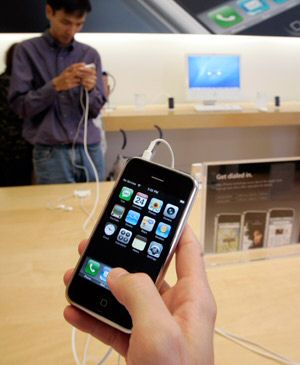 According to an expert on patent litigation, and attorney at Patterson Belkap Webb and Tyler, Chad Peterman the answers is could be; he said…”It seems that Apple could win patent claims where they are directed toward a touch-screen user device.”

The iPhone’s pinching gesture is correlated to a zoom function which is proportional to the space between the fingers; this is novel enough to possible be argued that other handsets using this feature could be infringing Apple iPhone Technology.

Another patent lawyer, Raj Abhyanker says: “They’d also be in an especially good position to stop others from including certain features. Apple could stop [their use] not only on mobile devices but also desktops.”

Obviously Apple are wanting to remain ahead of the game in touch-screen technology, and it’s a bit obvious they are going to want to protect that technology or at least be in a position to claim royalties from competitors who wish to use the pinching gesture.