modu, aka the mobile with many coats and obviously a PR stunt to gain some media coverage has stated they are now officially the world’s lightest mobile handset, and the Guinness World Record’s guys were on hand to prove the claim.

But with modu’s specs it doesn’t come as a great surprise as the handset weighs only 40.1 grams which is 1.41oz, and measurements of 72.1 x 37.6 x 7.8mm, however if you slap on some modu jackets is of course gets bulkier but only until you dock it in a modu mate which is their name for compatible modu enabled consumer electronics. 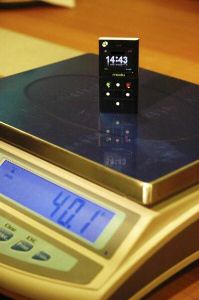