It has been confirmed by TomTom that the new Apple 3G iPhone has a version of the TomTom navigation software already running, and plans to sell to consumers who are not happy running Google maps.

The thing is although pricing, availability, and just about every other detail is somewhat sketchy to say the least, this did not stop a TomTom rep announcing “Our navigation system runs on the iPhone already” to Reuters straight after Apple announce the new GPS enabled iPhone.

The new Apple 3G iPhone added GPS support, but not 3D map support or even dedicated software, but instead opted for Google Maps as navigation commands. 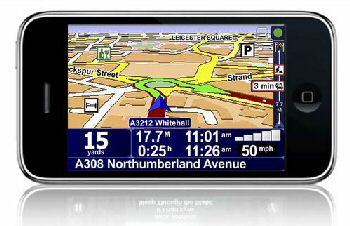 Apparently, Pocket-lint spoke to TomTom in the UK to try and find out more but unfortunately was told: “We have made our navigation system run on the iPhone; it looks good and works very well. We will have to look more closely at Apple’s strategy before we can say more about what kind of opportunities this will bring us”.

The TomTom spokesperson wouldn’t comment further on when they would consider selling their device. This means we will have to wait, for how long is anyone’s guess, and as for price, well no doubt it will be more expensive than previous TomTom devices.