The new i7110c mobile phone from Samsung has been revealed for the first time, and we can see that the Samsung i7110c is a candy-bar design.

A certain amount of mystery still surrounds the Samsung 17110c mobile handset, but the word is it sports a navigation cube that acts as a cursor control, 5 megapixel camera with flash, QVGA display, multimedia player, Bluetooth, FM tuner, and the trusty old microSD expansion slot. 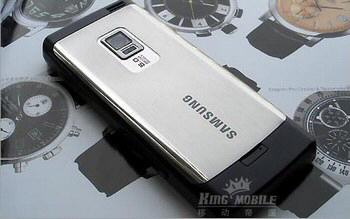 Storage capability is still a mystery on this one, and we are not too sure if it will incorporate a GPS receiver, although you can expect it to run on Symbian.

Price wise and availability wise your guess is as good as ours, would be nice for Samsung to make some kind of official announcement on this i7110c mobile phone though. However, once we find out more we’ll keep you informed.