It definitely seems to be the place to pick up the latest mobile phones; where else could one gain a BlackBerry Bold, a Kickstart or Pearl 8220 and now apparently an unlocked BlackBerry Javelin before anyone else has one?

There’s no place like eBay, as it seems they now have a BlackBerry Javelin unlocked version up for grabs and with a price that is climbing. 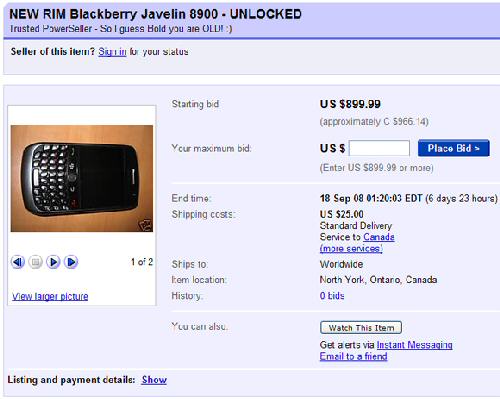 A BlackBerry Bold apparently went for GBP399 which is about $800USD while the Kickstart went for $1,725USD.

As for the BlackBerry Javelin, well the bidding start point was $899.99USD, but with a few more days left to bid I’m quite sure it will go for much higher.