The Samsung A867 Eternity sports a 3 megapixel camera with auto-focus and flash, with the ability to take photos in 3mp, 2mp 1mp and also 0.3 and w3mp, and has the ability for taking still photos and videos in two modes. 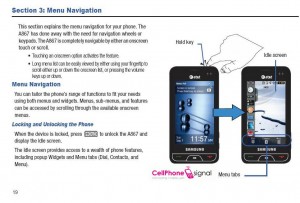 The Eternity features a multitask key which will launch the multitask menus that provides access to the most common features such as call, main menu, Media net and messaging, and music player.

For more screens and specs nip over to the source.