Get with P!NK via Samsung F480 Rockstar Edition handset

Samsung is releasing another version of their Samsung F480 handset to the German market, this time round it will be the Samsung F480 Rockstar Edition featuring P!NK and has been designed for P!NK fans.

The Samsung F480 Rockstar Edition will include songs from P!NK’s latest “Funhouse” album along with wallpapers on a 1GB microSD card which is included in the packaging. 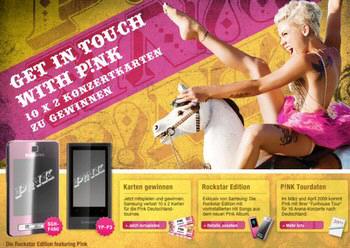 Furthermore anyone who purchases the Samsung F480 Rockstar Edition is registered into a contest where 10 people will win tickets to P!NK’s “Funhouse Tour” concert and there are further prises of Samsung devices such as the YP-P3 and YP-S3 MP3 players.