Apple iPhone 3GS data is not much faster than 3G version

There have been whispers that there is not that many places in the USA whereby the iPhone 3GS can actually take advantage of 7.2Mbps downlink connection except for one hope reports Intomobile.

The one hope is of course Chicago where AT&T went live with 7.2Mbps trails late in 2008 so hopefully AT&T might be letting other iPhone 3GS users in on the 7.2Mbps action soon. 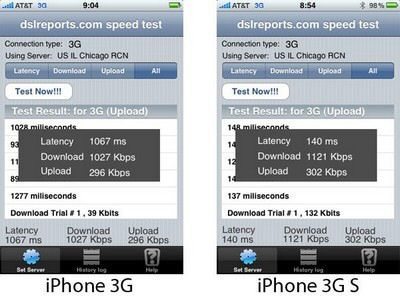 However, they ran some side by side tests as so far aren’t hitting that 7.2Mbps yet although the iPhone 3GS is marginally faster both up and down which could be attributed to the faster processor. So basically as of now the iPhone 3GS isn’t that much faster than the iPhone 3G.