On track means Adobe Flash 10 for smartphones is due for a beta release in October as Adobe’s MAX conference, and prime mobile operating system candidates include Adobe’s Open Screen Project. 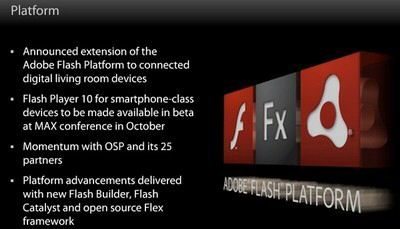 Adobe’s Open Screen Project includes the likes of Nokia, Google, Microsoft and Palm, and unless there has been some behind closed doors changes we should see Adobe Flash 10 Beta by the end of October.