It appears a couple of commercial slides pertaining to the upcoming Motorola Droid 2 and Droid X smartphones have somehow found their way onto the net waves and deliver several details on the two new Android platform devices destined for Verizon Wireless.

According to Kellex over on Droid Life, the first slide called “Digits” pertains specifically to the Motorola Droid 2 smartphone and gives up such details as the device will pack a 1GHz processor, email Exchange and updated keyboard.

Apparently the script voice over goes like this… “‘Does’ used to do a lot. Now it does even more. Now it does Email Exchange, so you can be hooked up to everything thing you need to do. Now it does 1.0GHz speed on a sleeker, more intuitive keyboard. It does and does and does. And the only thing it doesn’t do is ask for time off.” 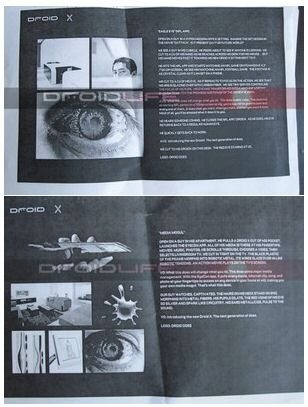 Next comes a slide called “Eagle Eye (NFL App)” and apparently promotes the Motorola Droid X 4.3 display and new multimedia application, with the last slide called “Media Mogal” which promotes the new EyeCon app which will come as standard on the Droid X.