More speculation over the next generation Apple iPad today in the form of more Apple iPad 2 case images hitting the net waves from a Chinese supplier , and these new images depict a slightly different design to the iOS device case.

According to an article over on Engadget by Vlad Savov and by way of Apple Insider and Micgadget, these new Apple iPad 2 cases have new slots which they speculate could be for a Mini Display Port and SD card slot. 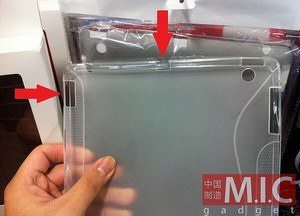 All other cut outs line up with previously spotted Apple iPad 2 cases such as camera dock connector, and speaker slot, headphone jack, volume controls and such.

However Vlad does also speculate that judging by the size of the one cut out it could also be for something else although he believes a USB slot is highly unlikely due to the dock connector slot.

So there you have it yet another Apple iPad 2 case sighting which adds yet more questions to the upcoming device, so what do you think the extra slots might be for, any ideas?