The iPad 2 is coming that is for sure seeing as the current model is being sold really cheap with many online store being out of stock, the latest news about the next-gen iPad reports that it could feature a “Light Peak Connector”.

Apple has partnered with Intel on Light Peak that would give better speeds and flexibility, Apple may possibly implement this new Light Peak-based high speed connection to the Apple iPad 2, obviously these are all rumours so please take it lightly until we have solid information for you.

There have been a few iPad cases with a mystery port (See Pic Below via Orange-Byte), it could be possible that the new iPad 2 could get a USB port that has been rumoured a few times, at the moment it is hard to say so we will have to wait for official news.

We are just waiting on your Apple for the announcement and full official specifications and features on the new iPad 2, all we have is speculations at the moment and they get us on the edge of the seat only to be disappointed when it never happens (But you love that). 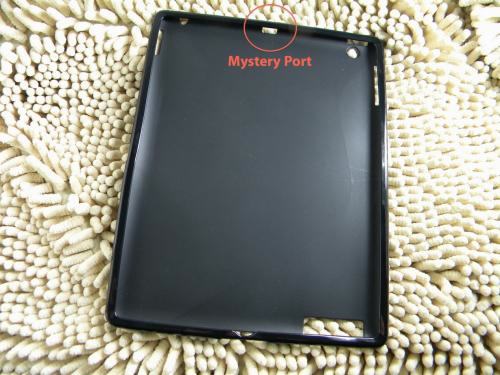 BGR has reported that the iPad is showing up online as out of stock, we know that they were going on the cheap, which tells us they want more room in stores for the new iPad 2.