Of course if you are going to be rushing out to purchase your shiny new HTC Thunderbolt 4G enabled smartphone on Verizon today, we gave you the Verizon Wireless prices earlier, but naturally Verizon isn’t the only place to purchase the HTC Thunderbolt.

According to an article over on Logic Buy, if you wish to grab the Android 2.2 Froyo packing HTC Thunderbolt for less than going with Verizon, Wirefly is offering the handset for quite a reasonable $199.99 and includes free shipping.

The HTC Thunderbolt carries a list price of a whopping $649.99 but customer’s get a 69 percent saving equating to 450 bucks bringing the asking price down to that low $199.99.

However, Amazon Wireless are also offering the HTC Thunderbolt at an even lower price of just $179.99 with free 2-day shipping although the device usually ships in eight to nine days, but if you don’t mind waiting a little while for your handset maybe Amazon Wireless is the way to go.

If you are purchasing the HTC Thunderbolt today where will you grab the Android smartphone from? 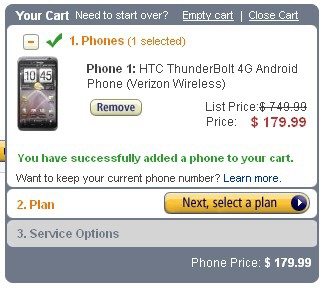