Apparently the Angry Birds HD iOS game for the Apple iPad received an update during the night of the 16th, which delivers a new golden egg along with 15 new levels and a new feature that has caused annoyance with Angry Birds HD users.

According to an article over on 9to5 Mac, Angry Birds HD now has adverts, but not your ordinary run-of-the-mill unobtrusive type. Apparently these new ads smack players in the face when hitting the pause screen.

Word is these ads pitch the official products and force the user to wait until such times as the advert is concluded and as such hinders resuming gamyplay as quickly as possible, and some annoyed users have voiced their annoyance in reviews on iTunes.

Here’s one such review…” This impacts the time to restart the level and continuous fade-in animation is very distracting. Now we’re forced to wait until the news loads EVERY SINGLE time the game is paused before restarting. Serious players will now have to wait an extra second or so each time a level restart is required”

Another posted…“really gives you the feeling that someone lowered the quality control bar and chose to add a poorly placed… and tacky-looking… advertisement on the pause / menu screen to push Angry Birds gear.”

Whilst another says they would have given a 5-star rating to the game if it weren’t for the ads…“I buy apps to get rid of ads not to get bombarded with more.”

So what about our readers that use Angry Birds HD on their Apple iPad, are these adverts driving you crazy forcing you to wait? Feel free to voice your opinion to our comments area below. 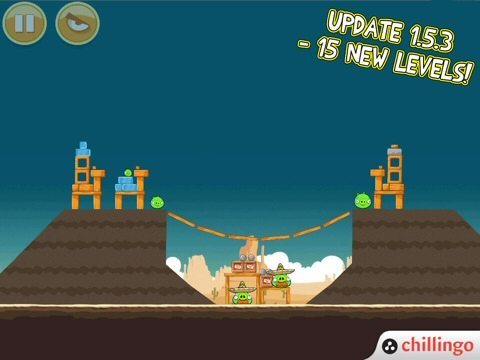