For those that own the Windows Phone 7 HTC HD7 smartphone on T-Mobile and have been patiently awaiting the arrival of Microsoft’s NoDo update that includes the copy and paste feature you may like to know your device should gain the update as of today.

According to an article over on Tmonews, they have heard a whisper that the Microsoft NoDo update will be released to the T-Mobile HTC HD7 as of today the 29th of March.

Along with that copy and paste feature, the NoDo update also delivers quite a few changes to Windows Phone 7 including better marketplace searches and improvements, improvements to the camera, improved WiFi, faster games and apps, and numerous performance enhancements.

However just what time the Microsoft NoDo update will be pushed out to the HTC HD7 hasn’t been revealed of if the update can be manually pushed to the device, so keep your eyes open for that NoDo update to hit, and feel free to let us know how it goes once you gain it. 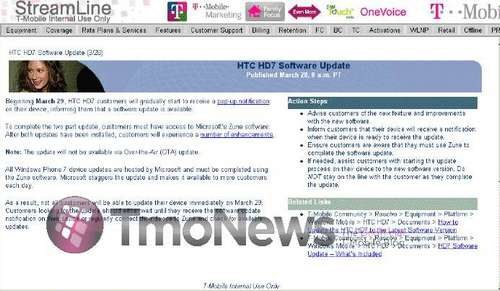