The other day word got out that Toyota has a custom interface theme on rival iOS App store for jailbroken iPhone handsets, Cydia as part of Toyota’s promo for their Scion tC vehicle. However it appears that Apple has enough clout to make Toyota change their mind.

According to an article over on 9to5 Mac and by way of Modmyi, on hearing about the theme on Cydia, apparently Apple contacted Toyota and requested the company remove the theme from Cydia.

Here’s what the Modmyi article states…” I received a call from our contact at Velti this evening as well as an email asking me to please take the theme out of Cydia. On the phone, he explained Apple had contacted Toyota and requested they remove the theme and stop the advertising campaign. They (Velti) in turn contacted me relaying the message. The reason Velti listed for the removal request of the theme emailed through our dev portal was “Toyota’s making us take it down…” Toyota had agreed to do so to “maintain their good relationship with Apple,” our Velti contact told me on the phone.”

Obviously Apple wasn’t too pleased that the carmaker was marketing towards jailbrakers of the iPhone with their Scion tC theme, one does have to wonder though what would have happened if Toyota hadn’t have capitulated so easily. 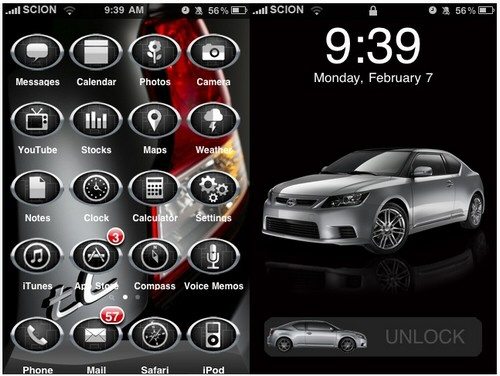