If you are an Android fan on Verizon and waiting for the new HTC smartphone the HTC Incredible 2 then you’re in for a treat as several images of the Android Froyo handset sporting the Verizon branding have popped up on the net waves.

The HTC incredible 2 still hasn’t officially been announced, but the pictures reveal that the Android handset sports an 8 megapixel camera with dual LED flash on its rear along with that “with Google” logo.

The word is the HTC Incredible 2 will come out to play on Verizon with Froyo but hopefully will be upgraded o Android 2.3 Gingerbread at some stage, and as for when the device will become available, well that’s still a bit of a mystery although a recent Verizon roadmap pointed towards the 28th of April but that could easily change, and whether the handset will actually come out to play as the Incredible 2 or something else isn’t known either.

So, are any of our readers hoping to grab a little HTC Incredible 2 goodness once the Big Red goes all official with the smartphone? 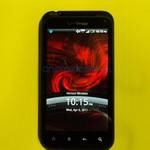