Now we all know there’s no real love lost between the iOS faithful and the Android faithful and both sides will defend their chosen platform to the bitter end. Apple gear has dominated the mobile space for quite some time but Android is eating away at Apple, and will undoubtedly become the most dominant in the mobile arena.

According to the survey, which consisted of mostly Android and iPhone users, most of those Android users said they wouldn’t consider purchasing an iPhone, the reason for this is because they “hate Apple,” although the survey doesn’t go into why said Android users hate Apple.

Apparently the survey took in over 2000 participants and according to the figures only 31.2 percent of Android user would consider buying an iPhone if said iOS device “worked better with non-iPhone apps and products.”

However; apparently 55.7 percent of Android users marked the box that indicated “Nothing: I hate Apple.”

So our question is, do our Android toting users really hate Apple rather than just disliking the iPhone, and if so why do you hate Apple? Have to say I am one of the Android faithful, but personally I don;t actually hate Apple or the iPhone. Feel free to voice your opinions to our comments area below. 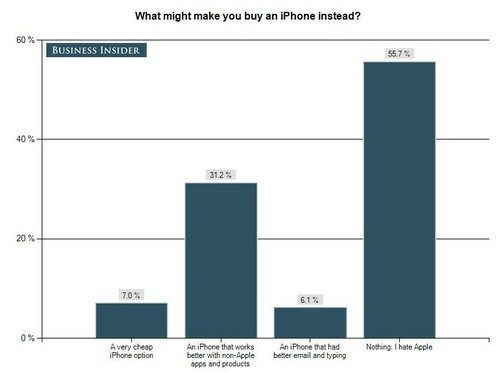