The design of the HTC Tube is by Antoine Brieux, who has shown us some amazing designs in the past and has almost definitely designed something quite amazing with the HTC Tube concept. In an article by Concept-Phones they state that the HTC Tube Phone and HTC Tube Tablet were detailed a while ago, so with the introduction of a laptop to the mix, which integrates the other two devices the set is now complete. Well there is also a stick handset, but that will be detailed in a later article. 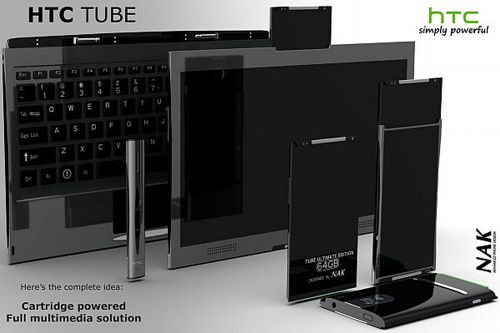 Therefore, the HTC Tube consists of a multimedia laptop that uses both the cartridge tablet and a keyboard accessory, a basic phone integrated for quick answering, a stick handset and a cartridge-powered notebook. The article by Concept-Phones goes on to indicate that considering the concept HTC tablet features, the laptop must use the 10.4 inch S-AMOLED multitouch display, 128GB of memory (at least), HDMI port, and either Windows Phone 7 or Android. 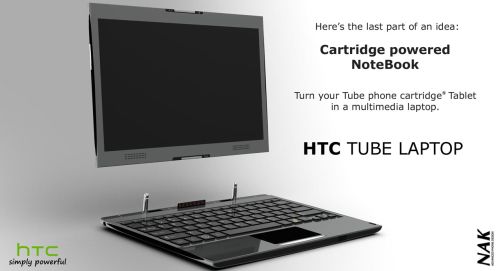 The HTC Sense is believed to be the UI of choice, with the HTC Tube Phone possibly providing its 3.2, 5 or 12 megapixel camera in different configurations. The design is absolutely brilliant and sets it apart from all other modular devices out there. Any company would be crazy not to invest in such amazing gear. When we here more on the NAK Stick Phone, we will let you know.

Please let us know what you think of the HTC Tube concept, would you like to see it released now?