White iPhone 4 Gets Handled on Video

Okay so way back when, you may have already seen a hands-on video with the white iPhone 4, but we have some hands-on footage for your viewing pleasure below with the a white iPhone 4 that was actually purchase today the 28th from Vodafone.

The hands-on with the white iPhone 4 has been done by the guys over at Slash Gear and they say the pale version of the iPhone is basically just the same as the black iPhone 4 but white and it comes running iOS 4.3.1 rather than iOS 4.3.2.

The guys also spend a few minutes comparing the white iOS smartphone against the Samsung Galaxy S 2, so that’s a bit of a bonus. They do say though that the white iPhone 4 doesn’t really hold any surprises.

So all that remains is for you to jump on down and hit that play button to check out the white iPhone 4 and you can view several images of the device on the Slash Gear website if you wish to do so. Other than that, is any of our readers going to grab the white iPhone 4 today?…enjoy. 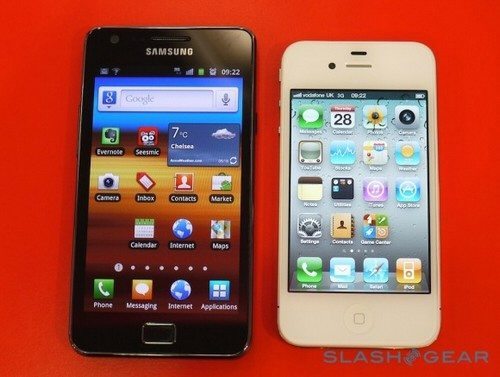