Apparently if you are in the market to pick up the HTC EVO 3D smartphone, although officially you can’t pre-order the Android 2.3 Gingerbread handset yet, the word is if you ask best Buy nicely they’ll let you pre-order the device.

According to Engadget Mobile, by way of Android Central, an internal Best Buy memo is doing the rounds detailing the guidelines for the Android handset and saying not to let customers know what the blogs are saying about the HTC EVO 3D along with not actively promoting the handset.

The Internal memo also say that Best Buy employees aren’t to offer pre-sell of the handset unless a customer specifically asks for it, so if you ask it appears you’ll get.

Thus it would appear, albeit secretly, Best Buy will allow the pre-order of the HTC EVO 3D by handing over cash for a gift card and then receive a promise of the handset once it officially releases.

Apparently the Android Central guys went into a Best Buy store and confirmed it, so if you want to do the same hit up your local Best Buy, and feel free to let us know how you get on. 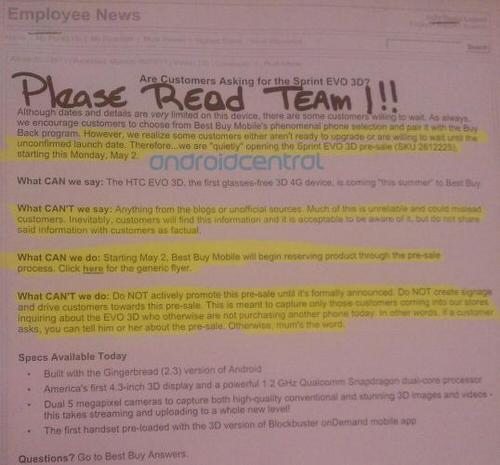